And so it begins! The World Series of Poker Main Event is the most prestigious tournament in all of poker. There are other events with bigger buy-ins and cooler and way less corporate events all over the world, but there's always something magical and historical about winning the WSOP Main Event in Las Vegas. Even though poker has reached every continent on the planet, the best of the best flock to Vegas every summer to see who is the biggest and baddest poker player on the planet. Sure, there's hundreds and thousands of better players in and around Vegas and scattered in every nook and cranny where they gamble in the world. But it still takes a bit of reckless courage to do what Hunter Thompson referred to as "Buy the ticket, take the ride." Mostly everyone will get a ride but come up empty handed. But one fortunate soul will fondle a mountain of cash and achieve poker immortality if they're the last player standing after two weeks of poker madness.

Meanwhile, France locked up a second bracelet this summer when Jeremy Saderne outlasted a massive field to win the Mini Main bracelet and $629K in cash.

The 2019 WSOP Main Event kicked off with Day 1A at the Rio on the eve of the Fourth of July. It would be the first of three opening flights with the third day always the most popular flight.

Even though Day 1A hosted on a Wednesday, it felt like a Friday vibe with players taking a shot at the glory, attention, cash, and bling.

This year's Day 1A saw an impressive number of entrants which featured an 44% boost compared to last year's opening flight with 925 runners.

Bryan Campanello bagged the Day 1A lead with 417,500. But did he really want the lead because of the dreaded curse of the Day 1 chip leader?

Raymond Travis Rice was second with 335,000 and the only other player over the 300K mark. 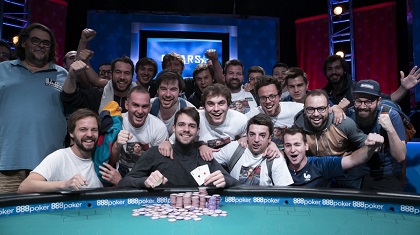 The Mini Main Event is an interesting concept with a buy-in that is only 10% of the actual marquee 10K Main Event. This year's Event #69 attracted 5,521 runners. They were all vying for a prize pool worth nearly $5 million.

Three Europeans made the final table with Ireland, Switzerland, and France represented. Three Americans were at the final table along with two players from Asia and one from South America. A truly international final table in Las Vegas.

The lone Frenchman would go on to defeat an America Lula Taylor. The unknown newcomer from Reno, Nevada certainly knew how to play super-aggro poker. She didn't back down and no one could stop her until it got heads up. Heck with a name like Lula, you expect her to be a cardshark from Reno or a character out of a Johnny Cash song.

Ireland's Phil Gildea hit the bricks in seventh place. Switzerland's Stefan Widmer was next to go out in sixth place, but he cashed for six-digits with $121.5K.

Argentina's Andres Korn got picked off in third place. He earned $287K for third and the finale was set between Jeremy Saderne and Lula Taylor.

Taylor trailed the young French pro when heads-up began. Even though the rail was filled with supporters from France, they all cheered on Taylor. On the final hand, Saderne got it all-in with pocket Aces, which held up against Taylor's Queen-ten.

Lula Taylor earned a runner-up payout worth $388,281. Not too shabby for second place. She also won the hearts and minds of every French supporter at the Rio. The poker world needs more Lulas.

Jeremy Saderne won his first bracelet and the second for France this summer. He also banked $629K for first place. I'm sure his crew is still partying after that fun and joyous victory.