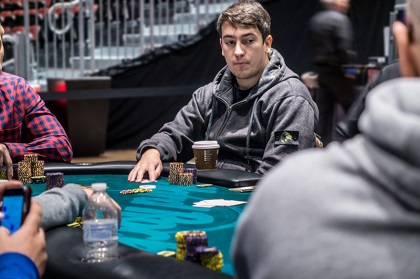 Pavel Plesuv is the chipleader at the Seminole Hard Rock. (Pic by AlCantHang)

The WPT goes Hollywood! Florida, that is. Hey, don't scoff at SoFla. Sure, it's not SoCal, but there's no shortage of old/new money and more donks that you can shake a stick at. The latest stop on the World Poker Tour is at the Seminole Hard Rock Casino in Hollywood, Florida. If you don't know your Florida geography, it's north of Miami on I-95. You can even see the illustrious casino from the freeway. At the WPT Seminole Rock N' Roll Poker Open, Pavel Plesuv is the chipleader with six remaining.

This latest WPT event featured a modest buy-in of only $3,500. This year's Rock N' Roll Open attracted 898 runners. The prize pool topped $2.8 million with $504K set aside to the champ. Not too shabby considering the $3.5K buy-in. The top 113 places paid out, but everyone at the final table would walk away with at least six figures.

At the end of Day 3, only 14 players remained in the hunt for the mountain of cash and the WPT title. James Rann bagged up the big stack. Even though most of the notable players had already busted, he still had to contend with former WPT champion Ravi Raghavan. The other survivors heading into Day 4 included Pavel Plesuv, Jeremy Joseph, Alan Schein, Jimmy Gilbert, Chris Kennedy, Roberto Bendeck, Jeff Yarchever, Brett Apter, John DuBois, Brent Kallman, and Tom Burandt.

Late on Day 3, former WSOP Main Event champ Joe McKheehen was picked off in 37th place. David Peters went deep and cashed, but the high-ball busted in 51st place. Loni Harwood made it into the Top 50, but unfortunately, she hit the bricks in 50th place.

On Day 4, the action went quick. Brett Apter was the first player to exit, which set the tone for the day. The went from 14 to 6 in an expedited manner. Alan Schein busted in tenth place. With nine to go, Chris Kennedy snagged the lead, but he wouldn't hold it for much longer.

James Rann failed to protect the lead and he bounced in ninth place. Before you know it, Roberto Bendeck bubbled off the final table in seventh place.

When Day 4 officially ended, Pavel Plesuv bagged up the big stack with a shade under 11M. Jim Gilbert was second with 8.6M, followed by Marius Gierse, Jeremy Joseph, Chris Kennedy, and short-stacked Ravi Raghavan. Back in 2012, Ravi Raghavan outlasted a sick final table at the WPT Five Diamond Classic at the Bellagio. Raghavan won $1.2 million and earned every cent by surviving a final table that included Shawn Buchanan, Antonio Esfandiari and Andrew Lichtenberger.

With only 1.3M remaining, Raghavan heads into the final table with the shortest stack. He's also the only member of the WPT Champions Club still alive, which means he's seeking a second title. He has a lot of work cut out ahead of him on Wednesday, but he's got finishing skills.

Tune in tomorrow to find out if Pavel Plesuv can go wire-to-wire and win $504K. It will be streamed starting at Noon ET via PokerGO.