Another wild bout between Germany and the U.K. at the 2017 WSOP. This time, the Brits prevailed and denied Germany another win. British pro Elior Sion picked off Johannes Becker heads-up to win the 2017 $50,000 Poker Players Championship. Sion prevented Daniel Negreanu from winning his 7th bracelet. Sion locked up a booty worth $1.4 million... plus bragging rights. 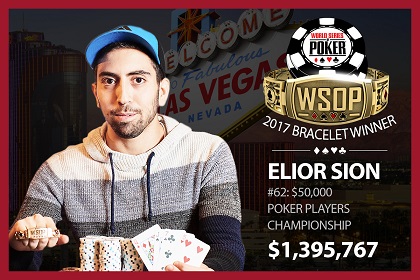 Going into the 2017 WSOP, Daniel Negreanu intended on winning multiple bracelets. After four plus weeks of action and the Main Event just around the corner, Negreanu had won zero bracelets this summer. He got close a couple of times, but he never went into the final six with the chip lead like he did for the fifth and final day of the 50K PPC.

Alas, Negreanu went card dead and couldn't get anything going at the final table. He eventually busted in a disappointing fifth place. Kid Poker will have to wait another time to win #7. Paul Volpe busted first at the final table when he bowed out in sixth place.

Ivo Donev went busto in fourth place. Ike Haxton hit the rail in third, which set up a heavyweight bout between Elior Sion and Johannes Becker.

The two slugged it out for five hours before Becker fell to the wayside. Sion won the tournament, and the bling, and the cash, and of course... the coveted Chip Reese Memorial Trophy.