Behold, the Milly Maker champion... Pablo Mariz. The resident of Montreal, Quebec went deep in the tag team event, but settled on a runner-up finish. This time, he was raging solo and went all the way, baby! Pablo Mariz shipped the Milly Maker for a sick score worth $1.2 million. The former finanical analyst turned online pro just added $1.2M to his bankroll, eh!

Also, over in Event #24, American online exile Shane Buchwald shipped the LHE bracelet for his first major score at the WSOP. 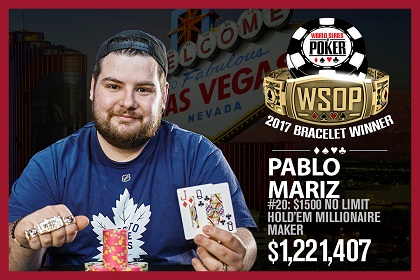 The French-Canadian Pablo Mariz already went deep once at the 2017 WSOP, but he was a runner-up in a tag team Event #10. Alas, he got another shot at the bling, albeit a solo shot, but he did not waste this opportunity. Mariz defeated American D.J. Alexander heads-up for the bracelet and the pyramid of cash.

Mariz left his job in finance to purse poker as a living. He was previously grinding it out online before this remarkable score at the Rio.

A pair of Irish players made the final table, but Yuriy Boyko busted in sixth place and Marc MacDonnell went out in fourth place. Brazil's Thiago Grigoletti went deep, but was dunzo in eighth place. 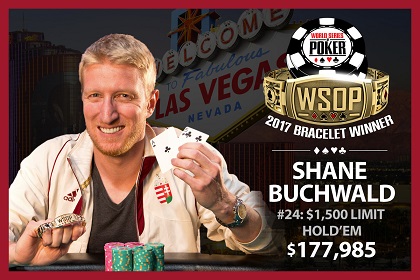 Old school. LHE! Remember how to play that? Okay, now make it a tournament. It's weirder than you think, especially in this era of NL and mixed-games (of the non-LHE format).

Shane Buchwald is the Limit Master after he won his first-ever bracelet in Event #24. The American from Santa Fe, New Mexico moved to Brazil to play online poker full time. Buchwald is one of the numerous American exiles who had to move overseas to pursue his passion and his career. The time away from home grinding always tests the soul. But after a 26-hour flight(s) Buchwald made his return to America a triumphant won with a victory in Event #24. Ironically, Buchwald had signed up for culinary school because he was thinking about life outside of poker. He always wanted to be a chef, and now he has some starter money to help him pursue his dream.

Buchwald faded a field of 616 LHE enthusiasts. He shipped a first place payday worth $178K.