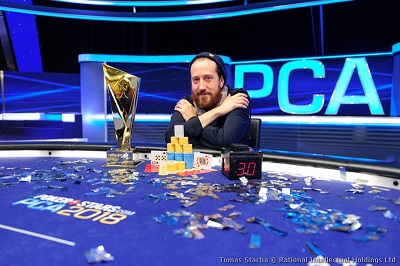 Ship it to, Mango. Steve O'Dwyer won the single re-entry $50K High Roller at the 2018 PokerStars Caribbean Adventure. Over the weekend Cary Katz took down the $100K Super High Roller. The second biggest buy-in event on the 2018 PCA schedule featured the $50K High Roller. A total of 31 original runners took a shot in this single re-entry event, with 15 additional 50K bullets fired at the prize pool. Out of the $2.2M in the kitty, Steve O'Dwyer banked $769K.

I know you're suspicious of this lazy reporter, so I'm not offended if you think I cut and paste the headline and most of the article. I mean the title “Steve O'Dwyer Wins High Roller” happens so often that it could legit be recycled due to the frequency of his win rate. In old-school newspaper terms, this would fall under the DOG BITES MAN genre and probably get buried on the back pages. It's not like MAN BITES DOG, in which the unusual, quirky story would land on the front page. In these days of sensational journalism in the click-bait era… IF IT BLEEDS, IT LEADS.

No actual dogs were harmed in the writing of this article. No poker players were bitten by dogs either. In addition, no dogs… or humans… bit Steve O'Dwyer. And according to trusted sources, O'Dwyer did not bite any dogs, players, or tournament staff. Everyone was well behaved. It's still the first week of the PCA, so not everyone has gone completely bonkers and “island crazy” after being stuck on Paradise Island and not blinking twice about spending 2 Bitcoin for a mango-banana smoothie.