Wild and wacky Saturday night in Las Vegas. Couple more bracelets up for grabs. Three events were bearing down on a final tables, but only one bracelet was awarded out. Event #15 $1,500 HORSE needed a fourth day to determine a winner. This time, the HORSEAMENT final table needed an additional day to play out the heads-up bout between Tim Frazin and Andrey Zhigalov. Frazin couldn't beat the Russian cash-game specialist and Zhigalov won his first bracelet.

Zhigalov previously made three final tables, but missed out on winning any bling. His best previous finish was fourth place in a Razz event last summer. 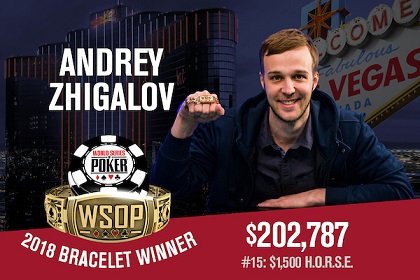 This "horsemanet" final table featured one of the best Omaha 8 players in the world in Scott "BigRiskky" Clements. The two-time bracelet winner also has a WSOP Ring on his impressive resume. He also got $3.2 million in career tournament earnings.

Clements has final tabled at least once WSOP every year since the summer of 2011, although he hasn't won a bracelet since 2007. He won his first piece of bling in 2006 with a victory in $3,000 Omaha 8. In 2007, he shipped his second bracelet with a win in a PLO donkament.

BigRiskky was seeking his third-career bracelet, but Clements' run ended when he was knocked out in seventh place. He'll have to wait another day to win bling numero tres.

When Day 3 concluded, Andrey Zhigalov and Timothy Frazin were still alive and amidst a heads-up battle. Action got suspended and they came back to play for a fourth day. At that point. they had sparred for a couple of hours without any end in sight.

After a night's rest, the two returned and when action resumed on Saturday, Zhigalov led 3M to 2.5M. Frazin couldn't hold off the Russian and he busted in second place.

Damjan Radanov bubbled off the final table in tenth place.