We're in the money! The 2018 WSOP Main Event played down to the money on Day 3. The money bubble burst late in the evening and action was suspended with exactly 1,182 players remaining. Everyone who returns for Day 4 locked up a min-cash.

Phil Ivey is probably the biggest name still alive. He bagged up 72/1182. Barbara Enright, the first woman to make a WSOP Main Event final table bagged up a monster stack that puts her in 10th place overall.

In Sun Geoum from New York City is the big stack with nearly 1.7M. Frank Flowers is second overall with 1.6M. Canada's Alex Won is third with 1.43M. Sam Bernabeau from Spain is fourth with 1.42M, and France's Eric Sfez is fifth overall with a tick under 1.4M. Rounding out the Top 10 overall are... Michael Lavenburg, Julius Malzanini, Alexandro Tricarico, Kaylen Lebaron, and Barbara Enright. 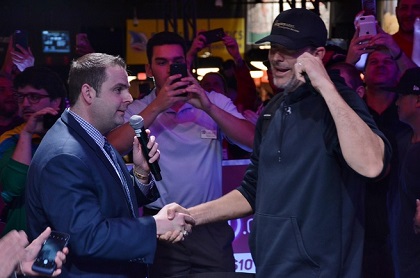 And then there were 1,182. The third day of action in the WSOP Main Event started with an unified field of 2,786 runners that combined all of the survivors from Day 2A/2B and 2C.

They expected 50% of the field would get liquidated after five levels of play (2-hour levels). But they didn't exactly expect the money bubble to pop. I figured it would happen early on Day 4, but looked like lot of folks wanted to throw down on Saturday night.

Matthew Hopkins became the Bubble Boy (or gender neutral Bubble Person) when he busted in 1,183rd place. He got a handshake from Jack Effel, his photo plastered over the internet, and won a freeroll into next year's WSOP Main Event. I also feel bad about the person who bubbled the bubble. We never hear about those sad stories? They should get a freeroll into a donkament of their choice.

A couple of former champs failed to advance to Day 4 and that included Scotty Nguyen, Greg Merson, Robert Varkonyi and Phil Hellmuth. Yes, the Poker Brat is nevermore.

Over 1,200 players busted on Day 3 including actor Ray Romano from Everyone Loves Raymond. Don't shed a tear for him... he can afford it! Say it with me... RESIDUALS.