On Sunday evening, Julien Martini ended a drought by becoming the first French player to ship a WOP bracelet on U.S. soil since 2014. Martini was also the first non-American and first European player to win a bracelet at the 2018 World Series of Poker. Julien Martini, originally from Paris, France but now residing in Taopei, outlasted a field of 911 runners to win WSOP Event #4 $1,500 Omaha 8. Martini banked a little less than $240K. The total prize pool for this first O8 event was worth more than $1.2M.

Martini made a final table last summer in a six-handed event. He took eighth place, but didn't squander another final table appearance this year. Martini ha snow cashed in every WSOP since 2014 (when he took 330th in The Little One for One Drop).

Oh, and by the way, Event #5 $100K High Roller started its final table, but they didn't play down to a champion. They ran out of time. Cue the "sad trombone" sound. Only six players remain in the $100K and they will come back on Monday for the conclusion. Nick Petrangelo bagged up the lead, with Bryn Kenney in second place. Elio Fox is still alive and 3/6. Fox is seeking his second bracelet this week! Also still alive... Andreas Eiler, Aymon Hata, and Stevie Chidwick. Fedor Holz, Adrian Mateos, and Jason Koon all made cameos at the final table, but they busted late on Sunday. 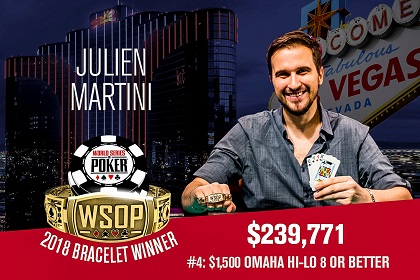 The first Omaha Hi/Lo event on the docket, a.k.a. the O8-Donkament, attracted 911 runners. The prize pool topped $1.2M with first place not quite getting a quarter of a mil. Not too shabby considering it's an O8 event.

This event required four days to play down to a champion. Play was suspended after ten-hours of action on Day 3. At that point, four players remained. Kate Hoang and Julien Martini bagged up the two biggest stacks remaining. They were poised for an inevitable showdown.

Julien Martini defeated Kate Hoang heads-up for the bling and $239,771 in cash. Seattle's Hoang walked away with a runner-up share worth $148,150.

This marked the sixth-career cash at the WSOP for Martini and his second overall final table. He took eighth in a 6-handed NL event last year.

Erol Massey bubbled off the final table in tenth place. Happy Shulman missed the final table by a few spots when he busted in 12th place. The godfather of Scandi poker, Chris Bjorin went deep but his run ended in 17th place.

The Club Poker WSOP Name of the Day goes to... Honesto Guiang, who cashed in 102nd place.