Another day, another 50% gone. The third installment of Day 2 included all of the surviving players from Day 1C. By the time Day 2C ended, only 1,655 players were left standing out of 3,480 initial starters. The lucky ones who bagged up chips at the end of Day 2C will join the survivors from Day 2A/2B on Saturday. The top 1,182 places get paid out in the Main Event and the remaining field took one giant leap forward.

Phil Ivey, Phil Hellmuth, Chino Rheem, and Davidi Kitai are among the big names who advanced to Day 3. 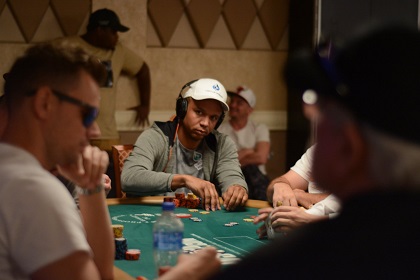 The 2018 WSOP Main Event continued with the third and final round of Day 2. On Friday, players who survived the cut on Day 1C returned to action for Day 2C festivities. As expected, half of the field was liquidated in only 5 levels of play, or 10 total hours of game-time action.

Out of the 3,480 players who survived the largest flight in WSOP history, only 1,655 players still have their dreams alive. These fortunate souls return to the Rio on Saturday to play in a combined field with players from Day 2A/2B. Although 2A and 2B were played on the same day, the fields were separated and 2A played in a different room compared to 2B. All three opening flights and their respective Day 2s will join together for one unified field for Day 3. Ooooooh, that's when thing really get juicy.

We currently have approximately 2,786 players remaining in Event #65 $10,000 NL Main Event. Only the top 1,182 players get paid out. The money bubble should pop early on Sunday a.k.a Day 4, but you can anticipate lots of crazy action on Day 3, otherwise known as moving day at the WSOP. Either you're gonna fly back home on Sunday, or you're extending your stay a few more days.

The Phils attracted the most attention in the Rio. Phil Ivey is quiet and you'll barely hear a peep out of him. While everyone knows where the Poker Brat is sitting at all times. If he's not bringing the attention to himself, there's a huge rail gawking at Hellmuth and awaiting for a blowup of Hellmuthian proportions.

Ignacio Sanchez bagged the overall lead for Day 2C and the overall Main Event chip lead with 627K. France's Eric Sfez is second overall with 552K. Rounding out the Top 5 are another Frenchman and two Canadians: Matt Klapstein, Victor Choupeauz, and Colleen Yamagishi.

Too many bustouts to count them all. Approximately half of the field would be liquidated on Day 2. Only 1,655 players made the cut out of 3,480 players who returned for Day 2C.