Razz, it's a tilt-inducing headache. And that's if you win! The losers will require a few months of intense therapy and medication to work out their anger issues and clear up any post-traumatic stress disorders. Razz is a frustrating game, but for some folks... they love it. Jay Kwon is one of those rare Razz enthusiasts who thrive on the difficult swings. Kwon holds down a day job and doesn't have many opportunities to play Razz, but when he took a shot in Vegas, he didn't waste the chance to go all the way. Kwon outlasted a final table that had a couple of top pros from Europe, and he still managed to come out on top.

Oh, and on Tuesday night, Loren Klein who his third bracelet when he took down Event #49 $10,000 PLO Championship. That marked a third bracelet win for Klein, who has now win bling in three consecutive summers. 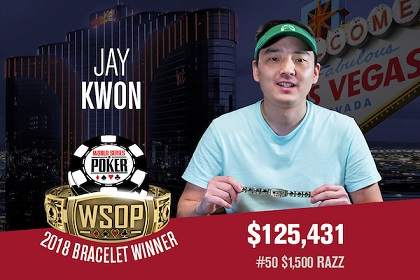 Ship it to Kwon!

This year's Razz event attracted 389 runners, sadists, and Razz specialists. They were trying to become this year's Razzmaster. All they had to do was survive the bricks and face-numbing beats.

Razz is one of the few games that tests the will of happy people. I've seen perfectly sane people become mentally unhinged after an orbit of Razz.

Tough final table in Event #50, with two of the top players in Europe: British pro Adam Owen and Dzmitry Urbanovich from Poland. Both were dazzling online players as well. They are crushing tables in the real world and virtual world.

During a post-victory interview, Kown told the WSOP staff, "You know, it's like my favorite game," said Kwon. "And I feel like it's an underappreciated game and people get frustrated at it. But I love the game and yeah, this means more to me than a lot of other tournaments, I guess."