Five starting days. $365 buy-in. Massive field. Sharks and donks a plenty. And in the end, a guy who registered for the wrong tournament won it all. Hot damn, I love the randomness of the WSOP! Jeremy Perrin bought into the wrong tournament. The PLO cash game player thought it was the PLO GIANT and not the NL GIANT. Oooops. He played anyway and not only did he advance to the final table... he won the whole thing. Perrin outlasted a final table that included two bracelet winners. Perrin shipped his first bracelet and a cool quarter of a mil for first place.

Who else won a bracelet this summer in Las Vegas? Check out a full and updated list of 2018 WSOP Bracelet winners. 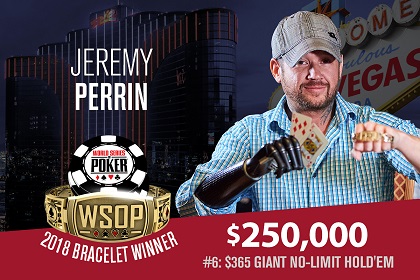 The GIANT! This highly popular, populist event started the first week of the WSOP and ended in July. Okay, it ended in early July but it took a month to play it out with five separate starting days.

The GIANT and its modest $365 buy-in was one of those frenzied events with a field of over 8,920 players.

This $365-buy-in event had a $2.6 million pool. Impressive for a $365 buy-in affair. Yeah, the suits at the WSOP were throwing the peasants a bone with this super-low buy-in. I can't wait for the day there's the $3 buy-in event with 17 million entrants and 37 opening flights! They'd probably still charge 50% in juice on that one.

The final table for the GIANT included: Daniel Fuhs, Matt Smith, Larry Cham. Alex Lakhov, Renato Kaneoya, Svetlozar Newstorov, Luis Vasquez, and Jeremy Perrin. Two of those players had won bling before. Russian pro Alex Lahkov and American pro Dan Fuchs. Both surived the avalanche of eliminations, but neither could go all the way to the promised land.

Dan Fuchs was the first player to bounce at the final table, followed by Matt Smith, Larry Chan, and Kevin Rines. Fuchs missed out on another bracelet win.

Russia's Akex Kahov busted in fifth place and he's had to wait another day to slap another piece of bling around his wrist.

Brazil's Renato Akio Kaneoya was knocked out in fourth place much to the dismay of all the Brazilians in Vegas who gathered on the rail.

Svetlozar Nestorov was the next player to get their ticket punched. Nestorov's elimination in third place set up the heads-up affair between Puerto Rico's Luis Vazquez and Jeremy Perrin.

The final two were playing for nearly $100K. That's the difference between first place and the runner up's share. Vazquez headed to the rail in second place. Vazquez still walked away with a hefty score worth $154K.

Jordan Bamford from the U.K. bubbled off the final table in tenth place.

Among those who went deep and cashed in the top 420 in the GIANT included... Jon Turner, Park Yu Cheung, Tony Ruggieri, Adam Owen, Peter Eichhardt, Bart Lybaert, and Rob Peacock.

Check out our complete list of 2018 WSOP Bracelet winners.