Ship it to Joe Cada! Four times! Joe Cada became the second player at the 2018 WSOP to win multiple bracelets. Cada joined Shaun Deeb as the only player to win two bracelets this summer. During the opening weekend of the 2018 WSOP, Cada took down Event #3 $3,000 NL Shootout. Just this weekend, Cada final tabled the Main Event and missed out at a chance to make history by winning the Main Event a second time. Cada busted in fifth place... but his WSOP wasn't over. Cada jumped into The Closer and promptly binked it.

The WSOP is essentially over minus the One Drop. Want to know who won a bracelet this summer? Check out our comprehensive list of 2018 WSOP bracelet winners. 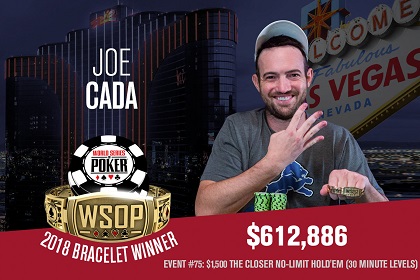 Behold, it's The Closer! The suits at the WSOP wanted to give the poker people one last chance at some bling and a small mountain of cash. The last event of the 2018 WSOP is the One Drop, but the last affordable event running was The Closer. This two-day turbo-charged event sported 30-minute levels. Event #75 had multiple starting flights and ended up a popular affair with 3,210 players taking one final shot at a bracelet. First place paid out $612,886, which was a heck of a score for an initial investment $1,500.

The CLOSER was a two-day affair. Sorta like a TURBO DONKAMENT. Event #75 was the final $1,500 Donkament on the slate. The Closer was expected to be a hit... and this one was no joke. A total of 3,210 runners took a shot at the bracelet at a first-place booty worth $613K.

Allen Kessler made waves with a deep run and everyone left at the Rio was wonder if this would be the day the Chainsaw popped his cherry and finally won a bracelet? Chainsaw cashed 133 times in his career, but had yet to finally break through to the winner's circle.

Chainsaw's flirtation with a bracelet came to a drastic ending when he busted in 36th place.

Joe Cada turned heads once again. Within 48 hours after his bustout from the Main Event final table, Cada went deep in The Closer and final tabled another event. Cada had won his third bracelet earlier this summer and added a fifth-place finish in the Main. Cada's run good in ginormous fields propelled him to a final table and then some.

No one at the table could stop 1) the accelerating blinds, and 2) Joe Cada.

Josh Turner, Brayden Gazlay, and Jimmy Poper were the first three out. With six to go, Cada was alive while Paawan Bansal amassed the big stack. Richard Cox hit the bricks in sixth place and Canada's Eric Afriat was knocked out in fifth place.

With four to go, Cada made his move. He doubled through Bansal and it was a whole new ballgame. Two players busted on consecutive hands when Richard Ali was picked off in fourth place by Cada and Jeff Tanouye busted in third place. That set the heads-up bout between Joe Cada and Paawan Bansal.

Cada led going into heads-up, which lasted only one hand. Cada turned a set of tens to knock out Bansal in second place. India's Bansal earned $378,765 for second place. Not too shabby for a consolation prize, eh?

Joe Cada banked $612,886 for winning The Closer. This bracelet marked his second bling of the summer and his fourth overall.

Cada kicked off the opening weekend with a bracelet win and bookended his series with a second win in the final weekend. He bought into The Closer moments after his elimination in the Main Event. Way to get back on that horse after you fall off.