Joe Cada had something to celebrate on a Saturday night in Las Vegas. The youngest ever WSOP Main Event champion shipped his third-career bracelet with a win in Event #3 $3,000 NL Shootout. Tough final table too with another fellow world champ, Joe McKeehen. Anytime you start the first weekend of the WSOP off with a nice score, it's a heck of a start. Cada got off to a $226K heads start.

If this were a George R.R. Martin novel, then he would have billed this final table as the Battle of the Joes. Both players won the WSOP Main Event (Cada in 2009 and McKeehen in 2015). Both had won two bracelets and were seeking a third one.

When it was all settled, McKeehen busted in third place and Joe Cada won the Battle of the Joes under the psychedelic hue of another bombastic, orgiastic Saturday evening in Sin City. Cada shipped his third piece of bling and McKeehen will have to wait another day to win his (although, I have a strong gut-feeling that McKeehen will win a bracelet this summer).

Cada won his first bracelet when he won the WSOP Main Event in 2009 and survived a final table that included Phil Ivey. It took five years before Cada returned to the ceremony stage at the Rio Casino to accept his second bracelet. Back in the summer of 2014, Cada won the 6-max $10K Championship. Overall, Cada currently has over $10.7M in career winnings. 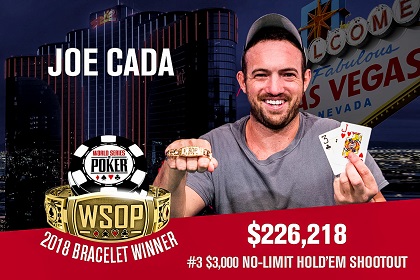 Seems like yesterday when Joe Cada won the 2009 WSOP Main Event at the Penn & Teller Theater at the Rio Casino in Las Vegas. Moments after he won, Cada leapt into the arms of Johnny Bax... whom most of the non-poker world assumed was his father. Ah, not quite. Sugar daddy, yet. Paternal blood, nope.

The first shootout event on the 2018 calendar featured a $3K price tag. This event attracted 363 runners and they created a prize pool just shy of a cool million.

London's Jack Maskill was dunzo in fourth place while fellow Brit Harry Lodge took fifth. Lodge and Maskill were trying to become the first European to ship a bracelet this summer.

Joe McKeehen busted in third place, which set up a heads-up battle between Sam Phillips and Joe Cada. Cada won that high-noon showdown. Phillips earned nearly $140K for a runner-up finish. Cada walked away with a score worth $226,218.

Jeff Trudeau bubbled off the final table in tenth place.

This final table marked a seventh career final table for Joe Cada. He's now won three bracelets, so three out of seven is an impressive feat. The kid from Michigan has finishing skills!