It's not easy to stomach getting THISCLOSE to winning a bracelet and then walking away empty-handed. Johannes Becker got another shot at winning his first piece of WSOP bling and he didn't waste this opportunity. Becker avenged his runner-up finish in last year's Player's Championship with his first bracelet victory. The recent university grad now has two WSOP final tables with a first place and second place finish. Not too shabby, eh? Becker became the first German to win a bracelet this summer.

The legendary Billy Baxter (and OG lowball gangsta) went deep in the Triple Draw Lowball event, but his run ended in 18th place.

The first online event of the season was hosted on WSOP.com. This super-low buy-in affair attracted 2,972 players. William 'Twooopair' Reymond knocked out Shawn 'sHaDySTeeM' Stroke to win the online bracelet.

Oh, and get those pitchforks ready. 2017 WSOP POY Jesus Ferguson has cashed in three events so far... including... wait for it... the first online event of the year. Oh, the drama! It's never a dull day in Las Vegas. By the way, watch Jesus' weak-ass apology video here. 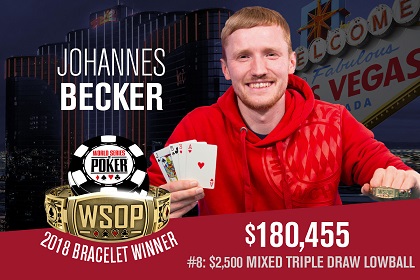 Ship it to Germany! Europeans notch another bracelet.

Johannes Becker outlasted a field of 321 players to win the Mixed Lowball bracelet. Becker is a "lowball specialist" which is pretty cool because it's an old school game that doesn't attract younger players, who have an affinity for action-packed games like NL hold'em or PLO.

With all these gimmick events added to the WSOP schedule, it's refreshing to see some old-school poker being played like Kansas City Lowball (that's deuce-to-seven for all you newskoolkidz.

This lowballa field included a healthy mix of both young and older pros. Billy Baxter, OG Lowball GOAT, went deep in this event. Baxter's lowball skills are as sharp as ever, but was knocked out in 16th place.

Johannes Becker came from behind to win his first bracelet. The German picked off Scott Seiver heads-up for the victory. Seiver earned $11K for a runner-up prize. Becker banked $180K... and the bling. Becker prevented Seiver from winning his second bracelet.

Aleksandr Simma bubbled off the final table in seventh place. Luis Velador was the first player out at the final table, when he was dunzo in sixth place. George Trigeorgis bounced in fifth place. Chris Vitch would have to wait another day to win his third bracelet when the two-time bling winner busted in fourth place. Jesse Hampton had a sensational run with a third-place finish.

The first online event of the year played out over the weekend. This was also the cheapest buy-in on the schedule. I mean, who wouldn't want to take a shot at a bracelet for a mere $365 investment?

The first WSOP.com event attracted 2,972 runners. Hee-haw! Talk about the running of the virtual donks. The prize pool fell short of $1 million. The top 333 places paid out.

The Club Poker WSOP Name of the Day goes to... Brad Cocking.