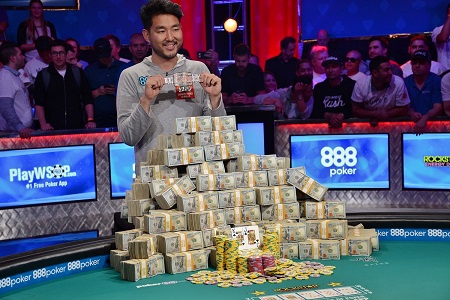 John Cynn achieved immortality. Cynn, a 33-year old IT specialist from Indiana, shipped the biggest poker tournament of the season: the WSOP Main Event Championship. It was no easy task. Cynn and Tony Miles played a marathon heads-up battle that spanned 199 hands and lasted over ten hours in real-life time. The final hand was dealt at 5am Vegas time. Breakfast burritos and mimosas on Cynn!

In the current global climate, there's high roller events with six-figure buy-ins hosted in the farthest corners of the planet, but none of those high balla affairs can compete with the historical significance and importance of the WSOP Main Event. Simply put, if you win the WSOP World Championship, you instantly become the gambling world's next biggest star.

Say hello to the newest star shooting across the early morning Nevada sky – John Cynn. After finishing in 11th place in the 2016 WSOP Main Event, Cynn not only advanced to the 2018 final table… he went all the way to the Promised Land and binked the prestigious Main Event.

This year's Main Event was the second-largest pool in its history and the largest field since 2006 and the wake of the UIGEA and Black Friday. The poker economy in the Americas is flourishing again after several years of darkness. And John Cynn emerged as the newest champion.

On the ninth day of the Main Event, the big story was the exit of Joe Cada. The 2009 Champ was seeking his second Main Event win. Unfortunately for Cada, his epic run came to a halt when he busted in fifth place. With Cada's exit, all eyes were on the big stack Michael Dyer, who had been running over the final two tables. Yet, Dyer finally got tripped up and he lost momentum. Instead, it was Tony Miles who emerged as the big stack and the over leader at the end of Day 9.

On the tenth and final day of the 2018 WSOP Main Event, only three players were still alive. Tony Miles held a sizable lead with John Cynn in second and Mike Dyer the short stack. Dyer didn't last too long on Day 10 when he busted in less than 20 hands. Dyer won $3.75 million for third place.

With Dyer's exit, a heads-up match was set between Tony Miles and John Dyer. Little did they know, but they'd engage in one of heck of a match that would not end until nearly 5 o'clock in the morning local time.

I know, I know... it's Vegas and there's tons of action going down at the bewitching hour of 5am on a Saturday night as it bled into Sunday morning. Over at the Rio Casino, history was being made as John Cynn came from behind to win a marathon heads-up match.

Cynn could have won this a lot earlier in the night if he made a hero call after Miles bluff-shoved the river with seven high. It was one of those, "If you call now, it's all over baby!" moments. Cynn smelled something rotten in Denmark and he was trying to talk himself into making the insane call with nothing but a bluff catcher. Alas, Cynn decided to fold. Miles dragged the pot and the two would end up slugging it out for another eight hours. Yes, eight hours. Both playes alligator blood'd it the rest of the night.

After that heck of a bout, Cynn emerged the victor. Tony “Smile” Miles earned $5 million for second place, while Cynn got to fondle bricks of cash worth $8.8 million.

Congrats to John Cynn who etched his name in the history books... for eternity. 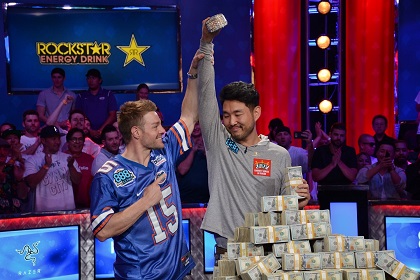 Day 10 started with three players still left in the hunt. The final three started on Hand #225. Coming into the finale, Tony Miles led with nearly 239M and Cynn was trailing by nearly 2 to 1 with 128.7M. Dyer was the shorty with 26.2M.

On the 19th hand of the day, or on Hand #243, we saw fireworks. Mike Dyer was all-in with Ace-ten against Tony Miles' Ace-Jack. Miles flopped a Jack and that's all she wrote for the quiet Dyer.

Then it finally got to heads-up. Tony Miles vs. John Cynn. Miles led 203M to 190M. They would end up slugging it out for nearly 11 hours before someone busted closer to 5am.

The lead swapped hands too many times to count. Cynn won a hand early on in the evening on Hand #297 to snag the lead with a full house versus a straight. Who said nine-four is a junk hand? Cynn jumped out to a 233M to 160M lead.

It appeared as though Cynn was in the driver's seat, but Miles rallied rather quickly to regain his lost chips. It was near even once again.

That's as high as Cynn would get before Miles stopped the bleeding and launched his own counter attack. Within a couple of hands, Cynn's lead was trimmed to 211.8M to 182M and then 198 to 195! Miles was back in contention just around Midnight.

John Cynn hunkered down. He would not let Miles get any more distance between the two. Once the blind levels jumped to Level 44, Cynn ralled. By Hand #405, Cynn regained the lead. And he never looked back.

Going into the final hand, Miles was on a mini-rush of his own. He cut the deficit 213.8M to 180M. And it looked like he was going to retake the overall chip lead. And then it happened. The coup de grace.

John Cynn defeated Tony Miles heads-up to win the 2018 Main Event around 5am local time. Good ole King-Jack versus Queen-eight. Miles shoved on a board of

and Cynn called with

for two pair... Kings up. The river was a meaningless

and Cynn's trips held up. He won the hand and the tournament and the world title and $8.8 million in cash!

For a runner-up performance, Tony Miles won $5 million. Not too shabby, eh?

Cynn's score is the fifth biggest in WSOP history. The Main Event pays out more players these days, so that's why Cynn didn't ship $10 million. But hey… $8.8 million is awesome anyway you gut it.

Congrats to John Cynn, the newest WSOP Main Event Champion. And the next biggest swinging dick in poker.

The World Series of Poker is 49 years old. There have been 40 Main Event Champions... sort of. Johnny Moss got voted in as the "Player of the Series" at the inaugural event. In subsequent years, the Horseshoe hosted a $10,000 freezeout that has become the standard today.