On the Fourth of July, the World Series of Poker achieved a historic moment. The $10,000 buy-in Main Event, the marquee event in all of tournament poker, attracted 7,874 players on the same day America celebrated its birthday. That final total for the 2018 WSOP Main Event marked the second-largest Main Event Championship in history. Only the 2006 Main Event, won by Jamie Gold at the height of the online poker boom, boasted more than 8K runners with a ginormous field of 8,773.

Timothy Lau bagged up the Day 1A lead with 338K. France's Smain Mamouni bagged up 311K, good enough for the lead during the second flight on Day 1B. France had another front runner at the end of Day 1C. Samuel Touil sat atop the big stack at the end of the third flight with 352K. Touil is the overall chip leader. Ah, will he suffer the dreaded curse of the Day 1 lead? Or will this be the year that the curse is finally exterminated? 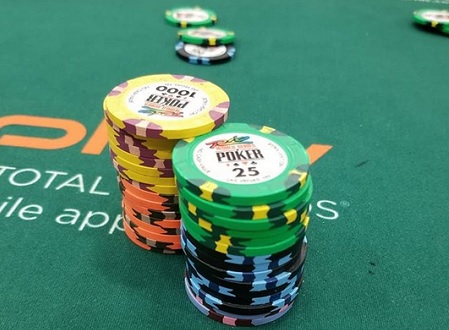 The first day of action is complete for the $10,000 buy-in Main Event. The Main Event is divided into three starting flights. Monday was Day 1A, or the least popular with 925 runners. Tuesday saw a sizable uptick on Day 1B with 2,378 entrants. Meanwhile, everyone waited until the holiday to play poker. For Day 1C, a total of 4,571 runners showed up to the Rio with $10K. Nothing says Happy Birthday, America better than saying "Deal me in!"

Phil Hellmuth showed up on Day 1C dressed up as a superhero character. Hellmuth was the lightning rod for hysterics on social media. Lots of fans and pros gave Hellmuth a hard time for his over-the-top entrance. But hey... it's Hellmuth. It's what he does. Whether it was Caesar, or a race car driver, or a super hero... whatever floats his boat.

The top 1,182 places pay out this year. Everyone at the final table will walk away with a seven-figure score. Ninth place pays out a cool million. Second place will earn $5 million as the runner up. All the cheesecake is set aside for the champion. $8.8 million worth.

Last year's champ Scott Blumstein busted on Day 1A. He said it was way harder and tons more pressure than playing at the Main Event final table last July. With Blumstein's elimination, we will not have a back-to-back champ. A new winner will definitely get crowned in two weeks.

Chris Moneymaker busted on Day 1C. Other champs who never made it... Greg Raymer and Jamie Gold.

So who's dunzo? Who dusted off $10K? Here's the obituary list.