Friday night in Las Vegas. Six men entered the Thunderdome and only three were left standing at the end of Day 9 of the 2018 WSOP Main Event Championship. It's hard to imagine that over two weeks ago, a total of 7,874 runners took a shot at poker immortality by buying a $10,000 ticket to the Main Event. The biggest story on Day 9 of the WSOP Main Event was the elimination of Joe Cada. The 2009 WSOP Main Event Champion returned to the final table nine years later with hopes of winning the Main a second time. Cada had a fun and successful summer in Las Vegas, including a third-bracelet victory. His run good spilled over into the Main Event, where he went even deeper than the event he won back in 2009. It was one momentous occasion to make an appearance at the final table once again, but Cada's remarkable run ended in fifth place.

Cada lost a race to Tony Miles, which put Miles in a spot to overtake the chiplead from Miek Dyer, who had been obliterating the final table and subsequent tables as they played down to nine. With Cada's chips and a bit more bravado, Miles went on a heater for the rest of Day 9. When the dust settled, Miles was the big stack with three to go, and Dyer was in deep trouble with the shorty. Oh, and John Cynn managed to avoid trouble, while chipping up along the way.

The Main Event will crown a champion on Saturday night. Check local listing for coverage. Who is gonna ship $8.8 million? Miles, Cynn, or Dyer? One of those names will be etched into the history books for eternity. 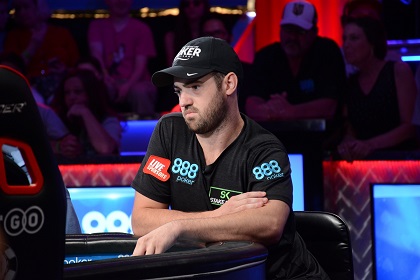 And then there were three.

The big news of the day? Joe Cada busting in fifth place. Heck of a run for a heck of a guy. The 2009 Main Event champ tried to pull off the impossible... and he got super close.

Rhode Island's Aram Zobian was the first player to bust on Day 9. He didn't last very long either and hit the bricks within the first orbit. Zobain earned $1.8 million for sixth place.

With five to go, Cada lost a race with pocket tens against Tony Miles' Big Slick. Miles had tanked for six or so minutes before he finally called Cada. A King on the flop essentially sealed Cada's fate, although he picked up a glimmer of hope with a gutter draw on the turn, but failed to get there on the river. Miles' Big Slick held up and Cada headed to the rail in fifth place.

At that point, Miles challenged Dyer for the chip leader. As Miles perked up, Dyer's stack came under assault. It didn't help Dyer's rough Day 9 that he also spewed chips and was stuck on the dark side of variance after running over his tables for the last couple days.

The tides had turned. The poker gods were smiling on Miles, while they turned their back on Dyer.

With four to go, Dyer all of a sudden found himself as one of the shorties with Manion. But it would be the postal worker who was the next player to meet his fate.

but he ran into John Cynn's

. The cowboys held up for Cynn and Manion was knocked out in fourth place.

With three to go, Tony Miles held over 60% of the final chips in play with a big stack worth nearly 239M. Cynn was second with 128.7M and Mike Dyer bagged up the shorty with 26.2M.

Dyer returns for Day 10 with the shorty. Can he stave off elimination and pull off one of the sickest come-from-behind victories in the history of the WSOP? Or can Cynn manage to win a heads-up battle against the big-stacked Miles?

Only two other players stand in the way of a world championship and $8.8 million in cash. Who is going to step up on Day 10 and become poker's next big swinging dick? Tune in tomorrow to find out.