The Main Event was progressing so fast that a blackout was the only thing that slowed down the action on Day 5. Late on Monday night, a storm blew through Las Vegas and the lights went out at the Rio Casino. Even after waiting for the emergency lighting to kick in, the TD made the call... to suspend action with 109 players and have everyone come back for Day 6.

Only 310 players started Day 5 and more than 2/3 of the field busted. At one point, the last woman standing Kelly Minkin had seized the lead early on Day 5 when she passed 5M. However, Minkin's turn in the top spot was short lived before the pack caught up. She struggled with a short stack for most of Monday night, but still managed to survived the cut. Minkin is currently one of the short stacks with 1.2M.

American pro Barry Hutter came into Day 5 with the lead. He survived the onslaught and is currently in the Top 20 overall. Shaun Deeb is still lurking, along with Shannon Shorr and E-fro. 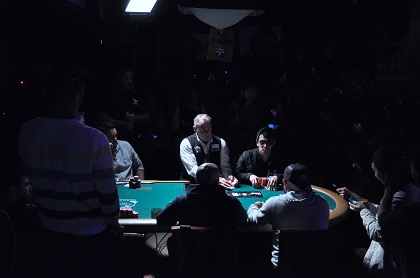 The night the lights went out at the Rio! (Pic courtesy of Winamax)

The 2018 WSOP Main Event started with 7,874 players. And we barely have 100 or so remaining. Day 5 saw the field get trimmed from 310 to 109. It might have been even fewer players but play was suspended due to a power outage late on Day 5.

Kelly Minkin seized the lead early on Day 5 when she busted Dong Kim. Cooler. Her Queens held up against pocket tens. Minkin passed 5M and didn't appear like she was about to ease off the gas. The pack eventually caught up to Minkin, who relinquished the lead with 200 or so to go.

With 180 to go, Minkin slipped back a few spots into the Top 15. Ben Pollak was also hanging tough nearby. Hari Bercovici and Alex Gross battled for the lead and both were closing in on 6M. Meanwhile, Barry Hutter and E-Fro hovered in the Top 5.

By dinner break with 171 remaining, everyone in the top 8 had stacks over 5M, but no one had 6M yet, Bercovici led with 5.8M. Shannon Shorr and Hutter were in the Top 10.

Ben Yu bounced in 150th place, while Paul Volpe was dunzo in 142nd place. With 140 to go, Belgian pro Bart Lybaert took a turn in the lead with 8.5M. Europe was 1-2 with Frederik Jensen from Denmark in second with 7M.

Late on Monday night, the storm hit Las Vegas that included a torrential downpour plus heavy winds. The Rio lost power and even though the emergency lights kicked in, the staff made the command decision to suspend action and have everyone return for Day 6. At that point, only 109 players were left standing and Mike Dyer held the lead.

With 12.6M in chips, Dyer was the big stack and the only player who passed the 10M mark.