Wild Friday night in Las Vegas. The month of June flew by and the Main Event is around the corner. Three more events played down to a winner. And yeah, we had four more first-time winners!

Event #54 required a fourth day to determine a winner and Portugal's Diogo Veiga took down the Big Blind Antes bracelet and thwarted Barry Hutter's quest for a second bracelet. The dynamic duo of Giuseppe Pantaleo and Nikita Luther won Event #55 $1,000 Tag Team. They won approximately $88K each, or a total team score worth $175,805. No one could stop Mike Takayama at the final table of the Super Turbo Bounty event. Takayama banked nearly $200K for first place in Event #59 $1,000 NL Super Turbo Bounty and won the first-ever bracelet for the Philippines. 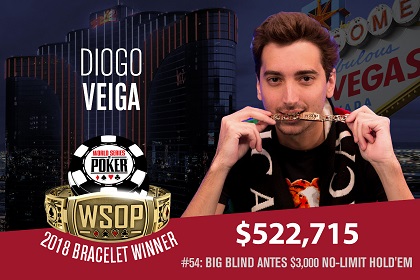 Ship it to Portugal! They have now won three bracelets... and still alive in the World Cup.

This Big Blind Antes event had a $3K price tag. Event #54 attracted 1,020 players and a prize pool worth $2.75M. First place would net more than a half-mil and the top 6 spots were paid out six-figures.

International final table in the Big Blind Antes event with players from Ireland, New Zealand, Belgium, Bulgaria, Portugal, and only four Yanks. This event needed a fourth day of action to determine a winner.

Play was suspended at the end of Day 3 with only 4 players remaining and it looked like it was Barry Hutter's to lose.

When it got heads-up, Hutter held the edge over Portugal's Diogo Veiga. Early into heads-up, Hutter tried to pull away, but Veiga rallied from behind. One Veiga seized the lead, it was all over for Hutter. Going into the final hand, Hutter was ahead with Ace-ten versus King-ten, but Veiga flopped a King and that's all the fat lady wrote.

American pro Barry Hutter was seeking a second piece of bling. Hutter shipped a $1,500 NL Shootout back in 2015 for a $283K score. Hutter got close to winning his second bracelet, but had to settle on a runner-up finish. Hutter banked $323,019 for a consolation prize. Not too shabby.

Diogo Veiga walked away with a score worth nearly $523K. ElkY would described it as "So sick!"

Kristen Bicknell missed a final table by a few spots when she busted in 11th place. Ryan Hall bubbled the final table in tenth place.

Ship it to India and Germany! Giuseppe Pantaleo and Nikita Luther won their first bracelets with a victory in Event #55.

Kelly Minkin, Haixia Zhang and Loni Harwood's team busted in ninth place. Bon Koo and Bienvenido Caballer were out front down the stretch, but their run fizzled out in eighth place. Yijie Zhang, Adam Lamphere, and Ao Chen went out in sixth place. Carlos Caputo and Gabriel Neto was dunzo in fifth place. The trio of Joanne Milburn, Alex Rocha, and Megan Milburn were knocked out in fourth place. German pro Manig Loeser and Peter Weinand went deep, but that tough busted in third place.

It got heads-up between three players from Japan -- Sho Mori, Hiroki Iwata, and Kazuki Ikeuchi -- and the pair from India/Germany with Nikita Luther and Giuseppe Pantaleo. The runner-up payout was approximately $108K while the champs would ship roughly $176K.

And no, they don't have to share a bracelet! They each get one. 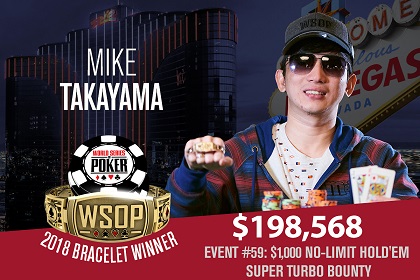 Ship it to the Philippines!

Terminator time. Mike Takayama destroyed the final table in Event #59. No one could figure out a way to stop the pro from the Philippines. Takayama went the distance and made history in the process.

The final table in Event #59 included players from Italy, United Kingdom, Philippines, and Germany. The Philippines had yet to send a winner to Las Vegas... until Mike Takayama stepped inside the Rio.

Germany's Oliver Rusing was the first player to exit the final table when he went out in ninth place. Jack Duong made another final table, but he'll have to wait another day to win his second bracelet. Duong was dunzo in eighth place. Elizabeth Montizanti was the seventh player out. Kav Shabbir went super deep, but he busted in sixth place. Spence Baker was smoked in fifth place. Great Britian's Stevel Jelinek's run ended in fourth place.

When Matt Smith busted in third place, it set up a final bout between Italy and Philippines. Lorenc Puka lost heads-up to Mike Takayama.