Say hello to the newest High Roller champion... Nick Petrangelo. The Americna pro shipped $2.9 million for winning the first major event on the 2018 WSOP schedule. The $100,000 NL High Roller (a.k.a WSOP Event #5) attracted 105 players. They created a prize pool worth over $10 million. Only the top 16 places paid out and the top three spots won at least seven-figures. Yeah, three players walked away from the Rio Casino with payouts in excess of $1 million.

Former WSOP Europe Main Event Champ Elio Fox kicked off the 2018 WSOP with a bang when he won his second-career bracelet. Fox was looking for his third overall bracelet and second piece of bling this week. Fox final tabled the $100K High Roller, but got stopped dead-cold in second place by Nick Petrangelo.

Petrangelo won his second-career bracelet with the $100K win. He won his first one back in the summer of 2015 with a victory in the $3K NK Shootout. 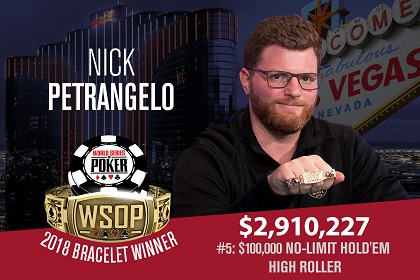 The first week of the WSOP is in the books, albeit a short week. This first weekend of the WSOP was anchored by the $100K High Roller. The biggest buy-in on the schedule that is not called the Big One for One Drop had a $100,000 entry fee. Only 105 brave souls took a shot at this prestigious bracelet event.

Fedor Holz is digging his retirement. The German wunderkind final tabled ANOTHER High Roller, but he must be losing his edge because Holz busted in ninth place. Yeah, it was shocking that Holz didn't win this and even more surprising that a German/Austrian did not ship the first High Roller of the summer at the Rio.

Andreas Eiler and Aymon Hata were trying to become the second European to win a bracelet this summer, but they both were picked off in fourth place and third place respectively. When Hata busted, a heads-up bout was set between Elio Fox and Nick Petrangelo.

Fox couldn't pull off another win and had to settle on a second-place finish. Fox earned $1.7 for a consolation prize. He's won nearly $2.2 million since the WSOP began. Not too shabby, eh?

Petrangelo now has over $14.6 million in career tournament earnings. This was his biggest score to date. His previous high was a runner-up finish in the WPT Aplha8 High Roller in 2015 for a $1 million score.