Even years work well for Paul Volpe. For some reason, he's the odd man out during the odd years at the World Series of Poker. In 2014, Paul Volpe won his first bracelet when he shipped $10,000 NL2-7 Lowball Draw bracelet. He won a second bracelet in 2016 when he won the $1,500 Dealer's Choice 6-handed. And since it's an even year... it seemed obvious that Volpe would return to the winner's circle this summer.

Volpe, a pro from West Chester, PA, won Event #9 $10,000 Omaha Hi/Lo Championship for nearly $419K for his third bracelet. Volpe is closing in on $3 million in total WSOP/WSOP Circuit earnings, while his total career winnings has now passed $7 million.

Meanwhile, Jeremy Harkin binked Event #12 $1,500 Dealer's Choice for his first bracelet. The 6-handed event had a final table cameo from washed-up actor/full-time poli-troll James Woods, who's run came to a halt when he busted in fifth place. 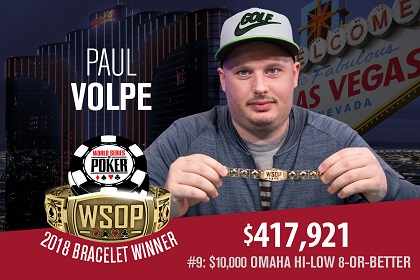 Paul Volpe added his third piece of bling to his collection with a remarkable victory in Event #9 $10K Omaha 8 Championship. These $10K events are tough as heck. Volpe earned every cent of his payday worth under $420K.

The list of money winners in this event was a who's who of the top O8 players in the game, despite only paying out 26 spots. In all, only 169 players took a shot in the O8 Championship... but they were some of baddest O8 asses on the planet.

Volpe quickly defeated Elezra heads-up for the win, the cash, and the bracelet. Elezra walked away with $258K as a consolation prize. Volpe banked a shade under $419K.

Volpe's career winnings has now passed $7.2 million. This vicory marked his biggest cash to date at the WSOP. Volpe now has 23 six-figure cashes, with three occurring at the WSOP this year. He's made two final tables and went deep in the $100K High Roller.

The Brother of the Grinder final tabled this event, but he was dunzo in 7th place. A pair of Europeans made the final table. Sweden's Par Hildebrand finished in ninth place, while Viacheslav Zhukov from Russia settled on a fifth-place finish. 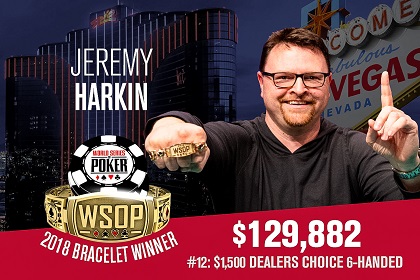 Dealer's Choice! It's a fun game we've all played with friends at the kitchen table, or in dens, garages, basements, back of bars, wherever. Mixed games tests your skills in multiple games, so these events reward the best well-rounded players in the game. Compare that to NL events when it's mostly a shovefest, donkament, where you pull and pray that you win your flips and races, while issuing brutal river beats to a sad sack of unfortunates.

Jeremy Harkin, a cash game specialist a pro from Oregon, faded afield of 406 runners to win his first bracelet and $130K in cash.

Harkin defeated fan favorite Frankie O'Dell, who's a two-time bracelet winner. A portion of O'Dell's rail drove out from Southern California to sweat their friend in hopes they also might recoup uncollected debts that O'Dell might have overlooked over the years. There must've been two lines at the cage... one to process winnings in Event #14 and the other lining up to collect from O'Dell, who banked $80K for a runner-up score.

George Trigeorgis whiffed in third place. Anthony Arvidson finished in fourth place. Actor James Woods, who spends most of his time trolling "snowflakes" on Twitter, final tabled the event but busted in fifth place. Scott Abrams was the first player to exit the final table when he was dunzo in sixth place.

Notables who went deep-deep in the Dealer's Choice included... Chris Klodnicki, Mike Leah, Jeff Lisandro, Chris Bolek, Chris Vitch, Jimmy Fricke, and Shirley Rosario (who was among the nominees for the Women's Poker Hall of Fame).

CHAINSAW ALERT! Yes, Allen 'Chainsaw' Kessler min-cashed in this event when he busted in 60th place.