Ship it to OMGClayAiken! Phil Galfond won his third bracelet with a win late on Sunday night. It was so late, it crept into early Monday morning. Galfond scored a hat trick with a first-place finish in Event #60 $10,000 PLO8 Championship. Galfond faded a start-studded field of 237 PLO8 enthusiasts. 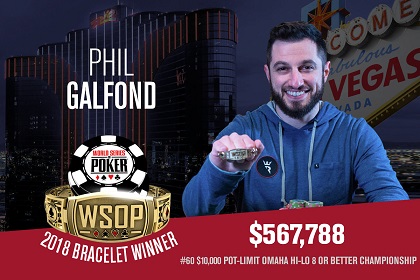 Ship it to Galfond. Thrice!

Phil Galfond won his third bracelet with a sensational victory in Event #60 $10,000 PLO8 Championship. Galfond final tabled his first event since 2015 and went all the way to win it. No easy task considering the final table was loaded with talented players and the entire field was infested with sharks and other PLOholics.

Galfond has always been considered one the greatest PLO players of all time. The American pro was also considered one of the best of the best nosebleed grinders in the history on the internets. He doesn't play as many events as he used to, which made the win even more special.

The GOAT still has it.

Galfond won his first bracelet in back in 2008 with a win in $5K PLO Rebuys! Oh man, Galfond is getting old. He won his first bling when the suits at the WSOP actually trusted the floor staff to handle rebuys properly during a "rebuy" event.

Galfond waited 7 years to win his second bracelet. In 2015, Galfond took down $10,000 Deuce-to-Seven Lowball bracelet for $224K. He stepped away from the grueling online grind to raise a family and focus on business interests. But Galfond returned to the Rio this summer to play in a couple of events. He's glad he did.

During the apex of the glorious online poker boom in 2008, more people knew Galfond as OMGClayAiken, and he was a PLO cash game monster. He won his first bracelet that summer and narrowly missed another one with a runner-up finish in the $25,000 NL 6-Max event. Galfond banked $817,781 for second place. Pretty sick any way you cut it.

Ali Abduljabbar's elimination set up a heads-up bout between Mike McKenna and Phil Galfond. Almost $217K separated first place from second place, so this was one of the most expensive heads-up matches at the Rio this summer.

Michael McKenna began Day 3 and the final day as the chipleader. He even was ahead when heads-up against Galfond began. However, Galfond scooped a pot to give him the lead. At that point, Galfond never looked back.

Michael McKenna earned a consolation prize worth $350,922. No too shabby for a runner-up score, eh?

We compiled a complete list of 2018 WSOP Bracelet Winners. Take a peek and find out who won a bracelet this summer.