Behold the Summer of Shaun Deeb. The pro from New York became the first player at the 2018 WSOP to win two events. Deeb took down Event #74 Big Blind Antes $10K NL 6-Max last night. It marked his fourth-career bracelet and the second piece of bling he's shipped this summer. In late June, Deeb binked Event #42 $25,000 PLO High Roller for a $1.4 million score. Deeb's victory last night thrust him into first place overall in the WSOP Player of the Year race.

Johnny World was running super hot in mid-June when he won his fifth bracelet in $10K H.O.R.S.E. and in the same week he nearly won the Chip Reese Trophy. Instead, Johnny World was the runner-up in the $50K Players Championship after he lost a heads-up bout against The Grinder. Johnny World also added a final table in the $10K Razz Championship and cashed in 10 total events. Just the other day, Hennigan was named to the WSOP Hall of Fame… an accolade that everyone in the poker world acknowledges is well deserved.

Johnny World was in first place in the POY, until Shaun Deeb's run in $10K Big Blind Antes NL 6-max. Deeb final tabled the Big Blind Antes event, which put himself in an ideal spot to retake the top spot. Deeb didn't waste the chance to pick up bracelet #4. He defeated three-time bracelet winner Paul Volpe heads-up for the title and his fourth bracelet.

Deeb shipped $813K last night and now has over $2.2M in earnings for both his bracelet victories this summer. Epic way to cap off the Summer of Deeb.

Don't forget to check out our comprehensive list of 2018 WSOP bracelet winners. 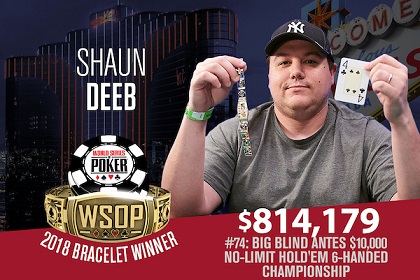 One of the last $10K Championship events on this year's WSOP docket. This one specialized in "big blind antes" which is the latest rage in the tournament realm. This new fetish event was essentially the old-school $10K 6-max Championship.

As expected, this pro-heavy event attracted a who's who of some of the premier NL gurus still lurking around Vegas. In total, this event attracted 355 runners and a prize pool over $3.3 million.

Deeb shipped Event #42 $25K PLO High Roller for $1.4 million and finished in tenth place in the $50K PPC. Deeb's first final table of the summer was a third place finish in Lowball. Deeb also went semi-deep into the Main Event, but his run ended in 105th place.

With three to go, it was a Frenchie and two Yanks. Paul Volpe and Shaun Deeb slugged it out with the big stacks, while French pro Romain Lewis was along for the ride.

Lewis wasn't about to give up so easily and put up a heck of a fight. For a hot minute, it looked like Lewis and Deeb would end up battling heads-up for the bling. Alas, Lewis hit the bricks in third place. Lewis took home $325K and then some.

A heads-up battle was set between Deeb and Paul Volpe. Volpe was seeking his fourth piece of WSOP jewelry. The two had met heads-up for a bracelet before... back in 2015 for the $10K PLH Hold'em title. Deeb outlasted Volpe that day and Volpe was wiating three years to seek out revenge. Too bad it didn't happen. Volpe settled on another runner-up finish. A bridesmaid to Deeb's bride once again.

Three-time bracelet winner Volpe was knocked out in second place, which paid out $503,196. Not too shabby for a consolation prize, eh?

Deeb banked $814,179 for the win. Deeb has now cashed 60 times and has over $3.3 million in career earnings at the WSOP. Oh, and four bracelets too. How about that? Deeb doubled his bracelet count this summer with wins in PLO and Big Blind Antes NL.

Shaun Deeb and Johnny World Hennigan have been battling for WSOP Player of the Year for the second half of the WSOP. Scott Bohlman won his first bracelet earlier this summer in Mixed Big Bet, then final tabled $10K PLO a couple days later. Bohlman made a late surge with a couple final tables in July and jumped into third overall in POY standings. With Deeb's win in Event #74, he's back in first place. But… Johnny World is still alive in $3K HORSE. Hennigan is a mixed-games specialist, so who knows if he can final table another event and potentially seize the POY lead right back? Whatever happens, this year's POY race has been fun to keep tabs on.

This year's WSOP schedule is back-loaded this year with several events in the last two weeks of the series. All eyes have been on the WSOP Main Event and the final table, but in the last couple days... Phil Hellmuth shipped his 15th bracelet and Shaun Deeb binked his second event of the summer for his fourth piece of bling.

Over in Event #73 DOUBLE STACK NL $1,000, Denis Timofeev from Russia defeated Leo Margets heads-up for the bracelet. Ben Yu finished in fourth place. Another deep run for Yu, but he missed another bracelet by a couple spots. Timofeev faded a field of 1,221 runners. The prize pool passed a million and almost settled on $1.1M.