Bobby Bellande finally got that monkey off his back. The pro, most known for his stint on the reality show Survivor, had gone deep a bunch of times at the WSOP... but had yet to win a bracelet... until now. Bellande avenged a second-place finish in the $50K 2015 Poker Players Championship to win Event #58 $5,000 NL short-handed. 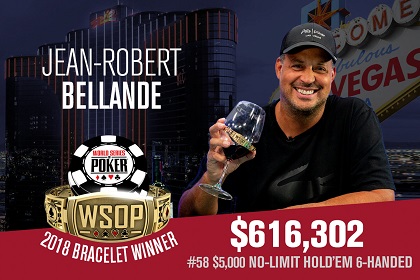 For many pros, the $5K event at the WSOP is one of the events they'd like to win the most. The $5K NLO affair has always been a “pro's pro” event, since it's chocked with top players and not as many amateurs as lower-tiered events and the $10K Main Event.

This $5K event played short-handed, or 6-max. Event #58 attracted 621 runners and a prize pool in excess of $2.8 million. As expected, it attracted many of their premier players in the world.

Six French players -- Jimmy Guerrero, Yann Brosolo, Guillaume Diaz, Yorane Keringard, Alexandre Reard, Sylvain Loosli -- were in the top 25, but all of them busted before the final table.

Action was paused with six to go and Bobby Bellande was the big stack. The final table also included two players from Europe -- Kacper Pyzara and Dean Lyall -- and threee other Americans with Andy Graham, Tay Nguyen, and Eric Blair.

Andrew Graham took home $254,684 for third place. With Graham's elimination, a heads-up duel was set between Britain's Dean Lyall and reality star and busto-robusto-busto Bellande. On the final hand, pocket Queens held up for Bellande against Ace-rag.

Dean Lyall banked a little more than $380K for second place. Not too shabby for a runner-up's share, eh?

Jean-Robert Bellande earned his first bracelet and won a first-place booty worth $616K. Lord knows how many people are hovering around the cage looking to collect a previous Bobby Bellande debt. We're joking. Not really. Bobby still owes me $100 from ten years ago.

Only the top 94 places paid out. The top 5 places won at least six-figures.

Check out our updated list of 2018 WSOP bracelet winners.