Hump Day at the Rio Casino in Las Vegas. Two more bracelets were awarded, while a couple of events required a four day of action to determine a champion. More history was made at the WSOP with the first-ever mother/son tandem winning bracelets. In the Super Seniors event (65+ players only), Farhintaj Bonyadi went all the way to win her first bracelet and $311K in cash. She's the mother of three-time bracelet winner Farzad a.k.a. Freddy.

Over in Event #38, Yaniv Birman faded a field of 83 players to win the $10,000 Seven-Card Stud Championships. Birman survived a tough field and even tougher final table to win his first bracelet. Birman got heads-up with two-time bracelet winner Jesse Martin, and denied Martin a third piece of bling. 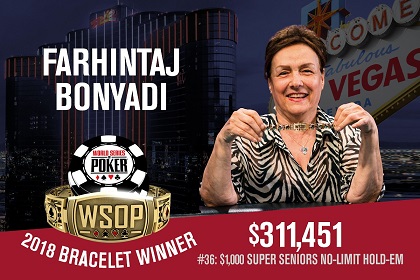 Another big event for poker lovers who were 65+. This year's Super Seniors event attracted 2,191 players. Many of these folks were playing poker before many of the top names in poker were even alive.

This particular event made history. Farhintaj Bonyadi and her son Freddy became the first mother/son duo to win WSOP bracelets. Doyle and Todd became the first father/son tandem to win bracelets and they currently hold the record for most bracelets won by two family members with 11. The Grinder won the $50K PPC the other night for his fourth bracelet, which tied him with his older brother Robert, who also has 4. The Mizrachi brothers have won 8 bracelets. And you can add the Bonyadi clan to the growing list of family bling winners.

And this historic sorta came out of nowhere mainly because not too many mothers whose sons/daughters play poker are top notch players themselves. I never considered a mother/son duo would win bracelets in today's game. I'm currently waiting for Jen Harman's kids to get old enough to play the WSOP. Because they might have the best shot at winning a bracelet. But that's the beauty of poker and the WSOP... any given day, history can be made, and it will often happen in the most random events.

Three-time bracelet winner Freddy Bonyadi is a long-time rounder who cut his teeth before the glorious poker boom in the 00s. He won his first bracelet in 1998 and was already an established player in Vegas circles before Moneymaker won the Main Event in 2003. Bonyadi won his third bracelet in 2005. He's come close a few times since then, but he's still chasing his fourth. Bonyadi has over $4.1 million in career earnings.

Freddy's mother Farhintaj entered the Super Seniors event with one previous cash to date... a 351st finish in the 2011 WSOP Seniors.

The 2018 Super Seniors required a fourth day to determine a champion. That's how big this field was with 2,191 runners and a prize pool that topped $1.9 million.

The Super Seniors final table including the legendary sports bettor Dink, who was portrayed by Bruce Willis in the Hollywood film Lay the Favorite (based on the book by Beth Raymer). Dink busted in sixth place.

Farhintaj Bonyadi came from behind to defeat Robert Beach heads-up for the bracelet. Beach held a 4.5 to 1 edge when the final two squared off. But Farhuntaj alligator blood'd Beach and wouldn't die so easily. She rallied back to get even and eventually landed the knokout blow. 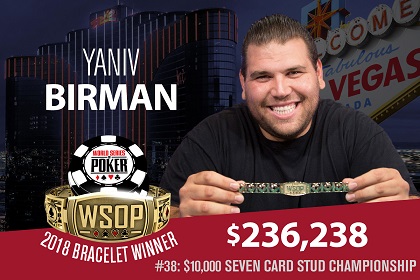 The Seven-Card Stud Championship is considered one of the most prestigious events on the WSOP calendar. As expected this year's field is a who's who of Stud players. The best in the world converge at the Rio to take place in the most-coveted Stud event of the season.

This year's $10K Stud attracted only 83 entries, but it was truly a dangerous field. The stacked final table included four bracelet winners including Matt Grapenthien, James Obst, Ben Yu, and Jesse Martin in the mix. In total, those four guys won 6 total bracelets with Yu and Martin seeking their third.

Alas, it was the Yaniv Birman's day. The amateur and relative unknown who bested the pro-heavy field in Stud. James Obst, and Aussie pro most known for his online prowess playing under the moniker "Andy MCLEOD" was seeking a second piece of bling. Alas, the Aussie busted in sixth place.

Matt Grapenthien was seeking his second bracelet, but his quested ended when he bounced in fifth place.

Stanford's Ben Yu will have to wait another day to win his third piece of bling. Yu's run ended when he was knocked out in third place. Yu's elimination set up a heads-up bout between Yaniv Birman defeated Jesse Martin.

Birman picked off Martin heads-up for the victory. Martin trailed when heads-up began, but the deck hit Birman in the face and prevented Martin from winning #3.

Jesse 'mazeorbowie' Martin is a cash-game specialist based out of Los Angeles. Martin has had a strong summer with 6 total cashes, a couple of final tables, and a couple near misses with a pair of tenth place finishes. With the runner-up finish in $10K Stud, Martin moved into 6th place overall on the WSOP Player of the Year leaderboard (where Johnny World is currently leading).