It's not easy to win one bracelet, let alone two. But winning events in consecutive years is damn near impossible. It's not improbable though because Adam Friedman pulled off the super rare feat at the Rio Casino on Monday night. In addition, the WSOP awarded another bracelet to the winner of the 3K Shootout. 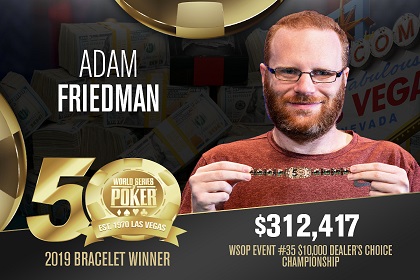 This year's 10K Dealers Choice attracted 122 runners and a prize pool that nearly topped $1.15 million. Only the top 19 lucky souls got a cut of the cheesecake in this event. Heck, most of the money went to the top three players at the final table.

Shaun Deeb was irked about the schedule. With five to go after Nick Shulman hit the road in sixth place, he wanted to finish out the finale but the schedule dictated an extra day despite this not being televised or live streamed. Two of the participants agreed with the scheduled break, while Deeb and Adam Friedman voted to continue playing down to a champion on Sunday night.

The final three were Matt Glantz, Shaun Deeb, and Adam Friedman. Friedman was trying to win his third bling and ship the 10K Dealers Choice in consecutive years. All he had to do was beat a top East Coast grinder in Glantz and last year's WSOP POY winner in Deeb. The one and only Deeb was seeking his fifth bracelet victory after winning two events last summer. Glantz had yet to bust thru to the winner's circle and he's on the short list of best pros to have never won a bracelet.

Glantz's run ended in third place. That set up the heads-up finale between Deeb and Friedman. No matter what happened with the final two, someone was about to add ANOTHER bracelet to their collection.

Alas, Deeb's run ended in second place and he banked $193K for a runner-up prize. Not too shabby, eh?

Friedman earned a payday with $312,417 for his victory. He slapped a third bracelet around his wrist for back-to-back 10K Dealers Choice wins.

Lucky Chewy missed out on the bling when he busted in fourth place. Wei Zhang hit the bricks in third place, which set up the finale between France's Johan Guilbert and David Lambard. The Frenchman could not defeat the American and Guilbert hit the rail in second place, which paid out $128,042.

Lambard shipped his first bracelet and walked away with a nice score worth $207,193.