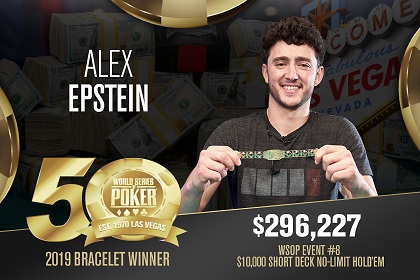 So, a PLO walked into the WSOP and took down a Short Deck bracelet. You gotta love stories like that at the Rio Casino in Las Vegas. I guess that's part of the beauty of the World Series of Poker. You really just need the buy-in and cojones and make a few adjustments along the way. Heck, Johnny Bax won a Stud bracelet learning the rules in the hallway before the cards went in the air at the 2005 WSOP.

Stuff like that happens all the time in Vegas, which is why the WSOP is a brutal yet magical place in the same breath. Sometimes noob luck is the best luck. Then again, any luck is awesome luck at the WSOP.

The first-running of a Short Deck event at the WSOP was also a 10K affair. A total of 114 runners took a shot at the Short Deck bling. Andrew Robl bubbled the final table in seventh place.

Chance Kornuth attempt to win another bracelet to add to his collection. Alas, the American pro busted in fourth place, which paid out $93K.

With three to go, the final table saw some fireworks. How about a 2-for-1 bustout? Yup.

Anson Tsang, Thai Ha, and Alex Epstein were battling for the bling and nearly $300K in cash. Then it happened. Two bustouts on the same hand. Simultaneous eliminations. Alex Epstein flopped a joint and it held up.

Tsang exited in third place (with the shortest of all three stacks), while Thai Ha hit the bricks in second place. Tsang won $130K for third place and Ha earned a runner-up score worth $183K. Not too shabby, eh?

Meanwhile, over in Event #12 $1,000 NL Super Turbo Bounty, Dan Park from Bayside, New York (Yo, Queens!) defeated Canadian Eric Cajelais to win his first bling. Event #12 attracted a massive field of 2,452 entrants and a prize pool worth $1.47 million. A total of 368 players were paid out in the Super Turbo Bounty.

Cajelais was seeking to add another piece of bling to his collection, but he could not overcome Park. Cajelais hit the bricks in second place, yet still banked nearly $140K for a runner-up finish. Not too shabby, eh? For a first-place finish, Dan Park earned a payday worth $226,243.