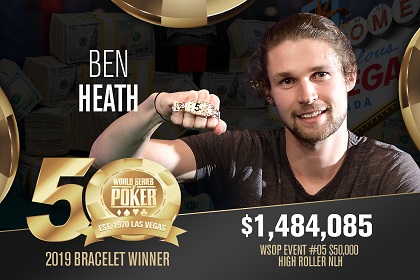 The first weekend of the 2019 World Series of Poker had a couple of special events to commemorate the 50th anniversary of the WSOP. The suits held the largest running of the donks with a 25K deep field at The 50. They also threw the big dogs a bone with the first High Roller affair on the docket. This one had a price tag worth 50K to celebrate 50 years of poker excellence.

Meanwhile, 110 ballers took a shot at glory in the $50,000 buy-in High Roller. This special bracelet event paid out only 17 players with all of the cheesecake set aside to the champion.

The six-pack of Yanks were: Andrew Lichtenberger, Elio Fox, Chance Kornuth, Sam Soverel, Nick Petrangelo, and Cary Katz. A couple of those fellows had already shipped bling of their own and they were seeking another bracelet to add to their collections.

Chance Kornuth busted in sixth place and he locked up at least a quarter-mil for his work. Nick Petrangelo's run ended in fifth place and he took home $335K.

Two Yanks and two Euros were in the final four. Alas, Dmitry Yurasov busted out in fourth place. The Russian had a sick score worth $458,138.

Sam Soverel got picked off in third place. He banked nearly $641K, but his elimination set up a heavyweight bout between Ben Heath and Lucky Chewy. UK vs. America.

Ben Heath banked his first bracelet and won a mountain of cash worth $1,484,085. He became the first player to win $1M-plus at the 2019 WSOP. And he's the first Brit to secure bling.

God save the Queen.

Zack had made eight WSOP final table before finally taking one down. He was on the short list of best pros who went deep and made multiple final tables, but never stepped into the winner's circle. Until now. Zack earned a payout worth $160,447 for winning Event #6.