2019 WSOP: Chainsaw Kessler with a big stack after Main Event Day 1B
by Pauly McGuire

The Main Event chugged along at the 2019 WSOP during America's birthday. Day 1A attracted a huge crowd that was 44% bigger than last year. Day 1B did not smash any records, probably due to the fact it was a national holiday and that Day 1C is still a more attractive option to play in the Main Event. 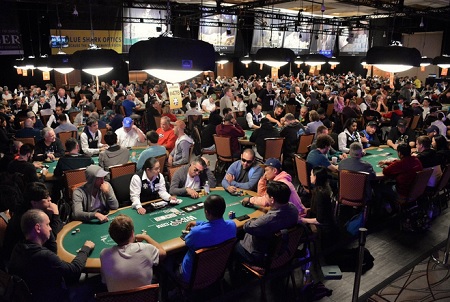 If you build it, the donks will come. Despite all the pomp and circumstance for America's birthday, the 2019 World Series of Poker hosted the second leg of a three-leg opening flight for the prestigious $10K Main Event.

Day 1B attracted 1,915 dreamers and grinders. Approximately 500 of them busted out on Day 1 and will go home empty handed. For pros, busting the Main Event is always the worst day of the year but busting on Day 1 is especially brutal.

At the end of the evening, only 1,417 players survived the cut. They will return on Saturday to find out who will be one of the few left standing with a shot at the money. Survive and advance. At this point, that's what it's all about.

When the dust settled and the fireworks died down (both literally and figuratively), Adam Owen bagged up the lead with 351,800. The British pro is no slouch, but he's having mixed feelings with the dreaded curse of the Day 1 chip leader looming overhead.

Gary Blackwood doesn't have to worry about that hokey superstition. He finished second overall on Day 2 with 330K.

Rounding out the top 5 are Asi Moshe, Tyler Gaston, and Chainsaw Kessler. Yup, Chainsaw has chips. Lots of them. At one point, Chainsaw was the actually chip leader before the chase pack caught up to him. Chainsaw at the final table is exactly what poker (and poker Twitter and 2+2) needs right now.

Several former Main Event champs were at the Rio on Day 1B including Greg Raymer, Ryan Reiss, Joe Hachem, Greg Merson, and Jesus Ferguson. All of them survived the cut.