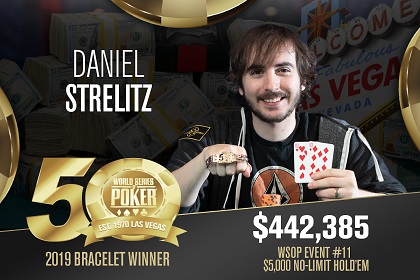 Another day, another two bracelet winners. While the Big 50 is playing down to its final table, a couple of other events declared champions including Event #11 $5,000 NL and Event #13 $1,500 NL Deuce-to-Seven Lowball Draw. The 5K NL is also a fun event but it's one of those rare WSOP tournaments that is stacked with premier pros and very few low-fi donks. When you win a 5K at the Rio, you truly earn every cent because you bested a shark-infested field. Fitting that Daniel Strelitz finally won his first bracelet by shipping the 5K NL.

Oh, and then there's Yuval Bronshtein. Things were a little shaky in his world and he was about to give up full-time poker and get a job in the square world as a financial advisor. Ah, just when you want to get away, they pull you back in! Alas, Yuval Bronshtein took down the Lowball bracelet.

Ali Imsirovic went deep in another big event, but he couldn't do better than fourth place. He cashed for low-six figures for $129K.

Serbia's Ognjen Sekularac busted in third place, which set up the heads-up battle between Shannon Shorr and Dan Strelitz.

When the dust settled, Shorr hit the road in second place. For a runner-up finish, Shorr banked $273K. Not too shabby for a runner-up score, eh?

Daniel Strelitz won his first-ever bling and he banked $442,385 for his bracelet victory.

Israeli pro Bronshtein came from behind to win the bling. He trailed 2-to-1 at one point in heads up before he stormed back to win. It took ten final tables to finally got the distance, but Bronshtein went the distance.