Kid Poker found himself within striking distance of another World Series of Poker bracelet. Negreanu had been there plenty of times before. Just because you make a final table, doesn't mean you're gonna win it. Same goes with coming into the final day with the chip lead. It's poker and weird things can happen.

Daniel Negreanu found himself the chipleader with seven players remaining when action on Day 2 ended. He had only six more players to survive before he could add bracelet #7 to his collection. Alas, Johnny World had other ideas… like winning his sixth piece of bling. 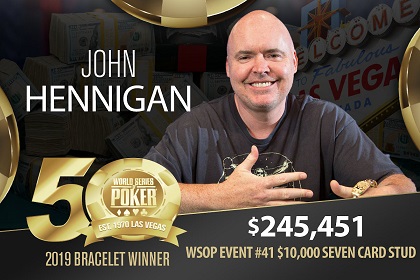 The 2019 World Series of Poker continued with its annual $10,000 Seven-Card Stud Championship. This old-school event was once the one event that the pros wanted to win. Stud has since become outdated compared to Hold'em and Omaha. But there was a time when the best of the best fought each other to the death in Stud.

Frankie O'Dell, Scott Clements, and the Grinder all won bracelets this summer. They were seeking a second piece of bling to add to their collection. They all missed out on the action.

Negreanu came into the final day with 1.5M big-ass stack and the lead. ODB was second and the only other player over 1M in chips. The Russian, Mikhail Semin, was the shorty with barely 183K.

Frank Kassela, who was seeking his fourth bracelet, became the first player to exit on Day 3. He hit the bricks in seventh place and could not add another piece of bling to his trio of bracelets (including the two he shipped at the 2010 WSOP). Chris Tryba hit the bricks next in sixth place.

With five to go, Negreanu passed 2.5M in chips. He took out David Singer in fifth place. Negreanu inched closer to 3M with more than half the remaining chips in play.

Negreanu took out two of the small stacks in succession. He sent the lone Russian at the final table, Mikhail Semin, packing in fourth place. ODB Baker's run ended in third place. He cashed for $104K.

It got down to Johnny World vs. Kid Poker heads up for the 10K Stud title. Hennigan was seeking his 6th bracelet, while Negreanu was one more bustout away from #7. Negreanu led 3.4M to 1.9M when heads up began.

Hennigan closed the gap and snatched the lead. They'd go back and forth for another three hours before Hennigan put away Negreanu.