Busy Tuesday at the Rio. The Poker Player's Championship continued and Phil Ivey is the big stack heading into Day 3. Three more events played down to a champion including the $10K PLO event that awarded a cool million to the champion. In addition, one of the Deepstack's finally finished out its final table and the Razz event crowned its new (sadist) champion. 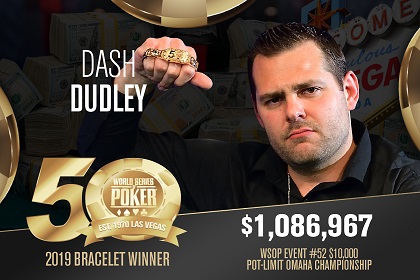 This year's 10K PLO 8-max attracted 518 runners and a prize pool that nearly topped $4.9 million. Only the top 78 places paid out with most of the cheesecake set aside to the champion (a tad more than a cool million) and the Top 3.

With five to go, it was one Aussie, one Brit and a tri of Yanks including Jeremy Ausmus. His run came to a half in fourth place.

Feldman the Aussie busted in third place, which paid out $464K. Not too shabby for a third-place score, eh?

Feldman's exit set up a heads-up battle between James Park and Dash Dudley. The Brit found himself heads-up against the American.

Alas, it was meant to be for Dash Dudley. The poker gods plucked him to win the next bracelet at the 2019 WSOP.

Dudley banked over $1,086,967 for first place. He also got to slap a bracelet around his wrist for the first time.

Santiago Soriano held off a final table that included a couple of Israeli players, along with a Brazilian, Frenchman, Italian, American, and Canadian.

Israel's Hasson busted first at the final table, while Amir Lehavot got heads-up with Soriano. Lehavot couldn't pick off Soriano and he had to settle on $229,420 for a runner-up score.

Soriano won his first bracelet and $371,203 in cash for taking down the Deepstack bracelet.

This year's junk-buster attracted 363 runners. They created a prize pool worth $490K. Only the top 55 sadists got paid out.

Kevin Gerhart was the last one standing in Razz. He banked $119K for his brick-dodging fortitude.

Jen Tilly went deep in Razz but she missed out on the final table when she busted in 12th place.