On the eve of the WSOP Main Event, things were humming along at the 2019 WSOP. A rare limit hold'em bracelet was up for grabs with Jesus at the final table in search of bling. Alas, it was one of the David Bakers who took down the Jesus. This time, OLD DAVID BAKER aka ODB stepped into the winner's circle for the second time in his career when he was the last one standing in the $1,500 donka-limit-ment. 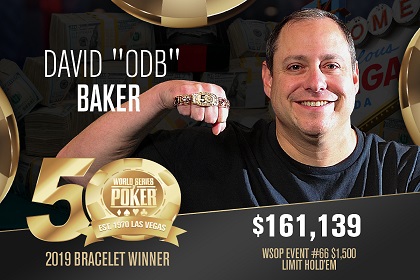 Seven years. That's a long time in a dog's life. It's an eternity in the life of a poker player. I've always equated life on the circuit as a dog year. It takes 7 years off your life. If that's the case, ODB waited half a century to return to the podium.

ODB won his first bracelet back in 2012 in an 8-Game Mixed affair. He won $271K and slapped the bling around his wrist for the first time.

He patiently waited seven years and a week to restore the glory. Amen! ODB has two pieces of bling... and he denied Jesus Ferguson another bracelet in the process.

Kid Poker's deep run ended in 20th place. He missed out on another potential final table (he made three already this summer with a runner-up finish in 10K Stud), but will have to wait another day to win his seventh bracelet.

Domizo Love's busted out in third place set up the finale between ODB Baker and Brian Kim. Alas, Kim could not thwart ODB's mission to go all the way. Kim earned a runner-up payday worth $99,564. Not too shabby, eh?

ODB Baker won his second bracelet and $161K in cash. The bling mattered a lot... especially when you go seven years between big-time wins. Well done to ODB.

The WSOP continued to dole out bracelets with Sunday online events to cater to the old school Sunday Grinders. Ah, that's the one thing you miss the most about Sundays in America. It's not church or pro football or sleeping in or brunch or binge drinking or any of the stuff that makes America grandiose... no, it's the online poker grind on Sundays is what I miss the most... nothing like Sunday online poker action. At least the WSOP tried to replicate that magic with a series of online bracelet events on Sundays.

The final table included Jesus Ferguson playing under the moniker 'camdi' and Bakes Baker. Also at the final table for this online bling event were Nicholas 'Illari' Baris, Tara

Jesus busted in seventh place, while Bakes hit the bricks in fourth place.

TheBurrSir exited in third place, which set up the finale between bertperton and Illari. When the dust settled, bertperton busted in second place. For a runner up finish, Tara 'bertperton' Cain banked $187,530... not too shabby of a consolation prize, eh?