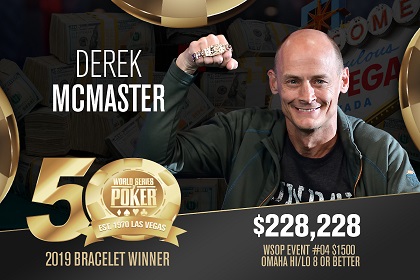 The 2019 WSOP completed its first weekend of action and nether Phil Hellmuth, nor Daniel Negreanu won bracelets despite making final table appearances. Instead, Yong 'LuckySpewy1' Kwon and Derek McMaster won their first bracelets. And in the opening event, the annual Casino Employee Event, a dealer from the Aria named Nicholas Haynes took down the first non-open event of the year.

The token Brit, Leonard, hit the bricks in ninth place. Shannon Shorr's deep run ended in eighth place. Ben Yu made another WSOP final table but he didn't win another bracelet. He busted in seventh place.

Meanwhile, the WSOP is hosting a bunch of Online Bracelet Events this year with the bulk of them running on Sundays. The first Sunday of the WSOP included a $400 NL bracelet event.