So, yeah... the naked guy is a thing of the past because this year's WSOP Main Event Champion will take home $10,000,000 this year. Holy apeshit batman! I hope whomever wins has a full 100% of themselves.

The 2019 World Series of Poker is also the 50th Anniversary of Benny Binion's brainchild. It will also be the last one at the Rio, so the fact that the Main Event attracted the second-largest crowd ever... and biggest since the peak of the online poker boom... is a heck of a way to cap off this year's corporate poker Olympics.

$10M is a sick haul anyway you cut it. In about 8+ days we'll find out who will be the last player standing. They already survived the brutal opening flight and Day 2. It now comes down to who can maintain the stamina over the next week or so where the pressure increases exponentially each day.

This year's numbers were the second highest in the history of the WSOP. Jamie Gold's year, during the apex of the glorious and redonkulous poker boom, attracted the all-time record of 8,773. Although 2019 fell short of the all-time record, a couple of earnest prognosticators thought they had a shot at breaking the number this year when a large segment of runners showed up on Day 1A, which had been historically one of the lowest turnout days. Alas, the July 4 Holiday on Day 1B might have had something to do with it, but who knows for sure. 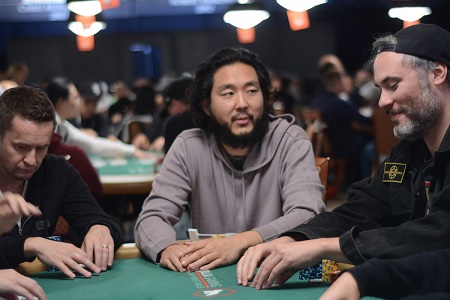 The WSOP tweaked their late reg for this year's 10K Main Event. They decided to keep it open until Day 2. That meant an extra 444 players were late arrivals... including Phil Hellmuth... who waited until Day 2AB/Day 2C to take a shot the glory and a mountain of cash.

The juiced 2019 Main Event numbers definitely cracked last year's Main Event number of 7,874. John Cynn won the 2018 title in what is now the third-largest field in history. At the time, Cynn won his title in the second-biggest donkfest but he's been downgraded by the swell of 2019 participants.

Speaking of Cynn... the defending champ still has a title to defend. He is one of the 2,880 players who made the cut and will return on Monday for a full field of combined players in Day 3 action.

At the end of Day 2C, Julian Millard bagged with the lead with nearly 948K.

Vlastimil Pustina also had a fantastic Sunday at the Rio with 930K, followed by author/podcaster/pro Andre Brokos and 895K on third place. Aleska Pavicevic and Nai Hu round out the Top 5.