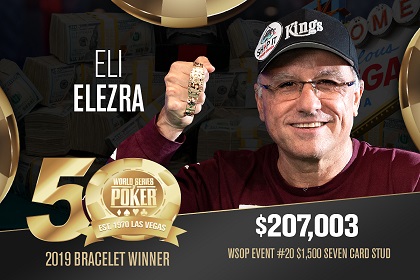 Another day, another bracelet. You would think it would be that easy. Eli Elezra won bracelets three different times in his career even though he had made 16 final tables. Sometimes you're good enough to run good and go deep and sometimes you're lucky to make a final table. But only a few truly lucky souls get blessed by the poker gods.

Elezra got blessed thrice before. When he got heads-up with young gun Anthony Zinno, he didn't back down and gutted out the win. Chalk up one for the old school guys.

Zinno missed out on winning another bracelet. He bowed out in second place, which paid out $58K.

Elezra banked $93,766 for this victory. Elezra's three other bracelet victories were all in six-figures with his first one worth almost $200K.

Elezra won his first bracelet during the apex of the online poker boom at the 2007 WSOP during $3,000 Seven-Card Stud Hi/Lo – $199K. He had to wait six years before he won a second one in 2013. That time it was Triple Draw. In 2015, Elezra won his third overall and his first Stud title.