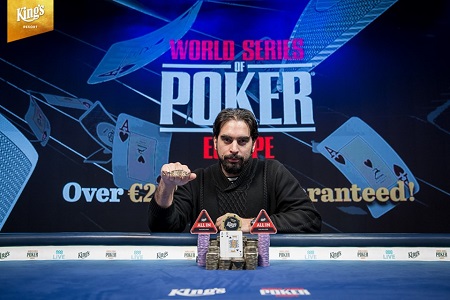 The 2019 WSOP Europe Main Event at the King's Casino in RozVegas has finally come to an end after a week of action to determine the bracelet. Alexandros Kolonias from Greece is no stranger to high roller events in Europe, but he had never had the chance to take down one despite final tables in Barcelona and Monte Carlo. He final tabled a partypoker MILLIONS North America event in Montreal in May, but just missed out on binking that one. After grinding it out all over the world including stops in Brazil, Australia, and the Bahamas... Kolonias stepped into the winner's circle to claim the WSOP Europe Main Event and his first ever bracelet. He also scored a sweet €1.1 million. Happy Halloween Alex Kolonias!

Italian pro Dario Sammartino embarked on another sensational and stupendous deep run in RozVegas and even though he did not win, he was still one of the biggest stories at the WSOPE Main Event. Sammartino finished in second place in the WSOP Main Event in Las Vegas in July. He had a second shot at a WSOP bracelet with an opportunity to win the WSOP Europe Main Event and came into the final day of action in the middle of the pack with six remaining. Alas, the Italian could not fade fate this time around. Another deep run fizzled out in a flash. Sammartino finished an impressive fourth place, but failed to go all the way to the Promised Land. Still... two Main Event final tables on WSOP and WSOPE in the same year is a difficult accomplishment.

Austria's Daniel Rezaei hit the road first at the final table with a ninth-place exit. Marek Blasko from Slovakia got picked off in eighth place, which paid out a tick under €100K.

At that juncture, Anthony Zinno bagged up the chip lead with six to go. He led with 16.8M and Alex Kolonias was closest with 12.1 million. Sweden's Rifat Palevic survived with the short stack worth 2.9 million.

On the final day, Rifat Palevic was the first to go and hit the bricks in sixth place. Czech Republic's Anh Do busted in fifth place, which paid out €244,653.

. Zinno flopped a King and won the pot with a pair of Kings. Sammartino was left with next to nothing and busted out shortly after.

Sammartino made a valiant final stand with

against Segebrecht's Jack-ten. Segebrecht flopped a Jack and the German knocked out the Italian. Sammartino's run ended in fourth place. The 2019 WSOP Main Event runner up earned €341,702 for fourth in the WSOPE Main. Heck of run... heck of a run.

With three to go, Claas Segebrecht chipped up to over 31M, or almost 60% of the chips in play.

Anthony Zinno could not mount a comeback and he made a final stand with Ace-nine against Kolonias's Jack-ten. Kolonias flopped a Jack and that's all she wrote for the American pro. Zinno banked €485,291 or $541K USD for a third-place finish. Zinno missed out on winning a third bracelet. He already had a trio of WPT titles on his impressive resume that included $9.1 million in cashed including $3.1 million in WSOP events.

When heads-up began, Kolonias held a 31.1M to 23M lead over Claas Segebrecht. It was Greece versus Germany in the Main Event finale.

Kolonias pulled away early but could not put away Segebrecht, who doubled up with pocket Aces to almost pull even.

Just when you thought it could go all night long, the two rumbled.

. Kololinas flopped a King, turned a Broadway draw, and then caught running spades to river a flush. The Ace-high flush won the pot and Segebrecht busted in second place.

For a runner-up finish, the young German earned €700K or approximately $781K USD. Not too shabby, eh?

Kolonias cashed at the WSOP in Las Vegas five times including four times at the 2016 WSOP. At the 2016 WSOP High Roller for One Drop, he took 19th place in the $111,111 buy-in event. Kolonias had made final tables of high roller events in Europe back in 2016, but he never won a major event before. He final tabled the partypoker MILLIONS North America in May 2019 but finished in fourth place.