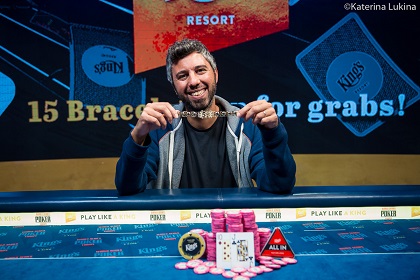 Ship it to Israel! Asi Moshe won his fourth career WSOP bracelet including his second one since this summer when he secured his third bracelet at the 2019 WSOP in Las Vegas at the Rio Casino. Moshe added a second WSOP Europe bracelet to his growing collection and the Israeli pro now has won bling in RozVegas in back-to-back years with a bracelet victories at the King's Casino in 2018 and 2019.

2019 WSOP Europe Event #9 €1,650 PLO/NL Mix attracted 279 runners in this hold'em slash omaha event catering to mixed-game enthusiasts. The PLO/NL Mix had a juicy prize pool worth €397,575. Only the top 42 places paid out though with the majority of the cheesecake set aside to the top three finishers.

Jesus Ferguson was the first player to bust at the final table when he hit the bricks in ninth place. Quan Zho busted in eighth place, followed by Dragos Trofimov in seventh place, and French-Canadian pro Erik Cajelais in sixth place.

Danish players finish second and fifth at the final table. Jakob Madsen's run ended in fifth place, while Kristoffer Rasmussen got heads-up for the bracelet but lost to Moshe. He couldn't stop the Moshe Man from mashing his fourth bracelet victory.

Denmark's Rasmussen earned €60,230 for second place. Not too shabby, eh?

Asi Moshe banked €97,465 or approximately $108K for his first-place finish in the WSOPE Mixed PLO/NL event. This marked a fourth bracelet victory for Moshe.

Last year at the 2018 WSOP Europe in RozVegas, Moshe won Event #2 €1,650 NL 6-Handed at the King's Casino for his second career bracelet. He faded a field of 221 runners and picked off Robert Schulz heads-up for the EuroBling.

Back in 2014, Moshe popped his bracelet cherry with a victory at the 2014 WSOP $1,500 NL Donkament for a sickly score worth $582,321. Any time you can be the last one left standing during the running of the donks, you earn street cred in my book.

With his latest score in RozVegas, Moshe has now passed over $2 million in career WSOP winnings. Overall, Moshe cashed for $2.5 million overall in international tournaments.