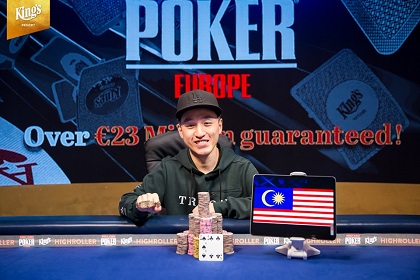 Sometimes you're just crushing life. Chin Wei Lim has been on a sick roll the last week in RozVegas. He final tabled two High Roller at the King's Casino in Las Vegas, won one, and banked over €3.9 million.

Chin Wei Lim did not waste a second opportunity to close on a bracelet. He final tabled WSOPE Event #4 €250K Super High Roller last week, but fell short of the mark when he busted in second place against James Chen. The 250K SHR had a colorful table that included Tony G, but the Diamond High Roller final table was even tougher that included a trio of German highballing sharks and the one and only Phil Ivey.

Overall, WSOP Europe Event #12 €100,000 Diamond High Roller attracted 34 original runners that added 38 additional re-entries for a total of 72 entries. The prize pool topped €6.8 million with only the top 11 places paying out. The top two places earned seven-figure paydays with most of the cheesecake set aside to the Diamond champ.

Ivey didn't stick around long on Day 3. He was the first player to exit the final table. Danny Tang hit the road right after in seventh place.

The Germans all went out one after each other. Three were alive with six remaining, but none were left with three to go. Ole Schemion, Matthias Eibinger, and Christoph Vogelsang were knocked out in succession.

Lim got heads up last week against James Chen and failed to put away Chen. This time, Lim's killer instinct kicked in and he finished off Jean-Noel Thorel.

Lim won his first WSOP bracelet by taking down WSOP Europe Event #12 €100,000 Diamond High Roller. He walked away with a lion's share worth €2,172,104, or approximately $2.4 million in Yankee Bucks. In the last week in RozVegas, he's now earned almost €4 million.