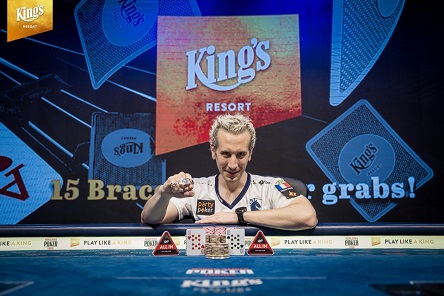 Ship it to ElkY! The man, the myth, the legend, and Triple Crown winner… Elky binked another tournament and secured a second bracelet eight years after his first bling win in Las Vegas in 2011 and nearly 12 years after his iconic PCA victory in 2008.

The 2019 WSOP Europe at the King's Casino in RozVegas capped off another successful run with the Colossus EuroDonkament. Fitting that Elky was rewarded for being the EuroDonkSlayer as the last player standing.

Italy's Pasquale Braco bubbled the final table in tenth place. Shaun Deeb busted just before Braco and he missed a shot at the final table and a chance at winning another WSOP Player of the Year. Deeb needed to finish in fifth place to pass Negreanu and earn enough points to secure POY. Deeb came close but missed out. Aussie pro Robert Campbell came into RozVegas with the POY lead but he coughed it up once the WSOPE began and Negreanu made his late run. Campbell cashed in the Colossus but he busted in 149th place and missed out on a chance at another bracelet and regaining his lead.

Elky picked off Israel's Avraham Dayan to win the tournament, bracelet and small mound of cash. Dayan banked €117,630 for second place or approximately $131K in USD. Not too shabby for a runner-up prize, eh?

Elky slapped a second career bracelet around his wrist and it only took eight years before he won a second one. First place paid out €190,375 or roughly $213,420 in American greenbacks. So sick, ya?

Elky is the French GOAT, c'est vrai? The kid has been a rockstar since he was a teenager crushing the gamer world with his mad-crazy-sick video game skills in Starcraft. You can't really make a ton of cash in Warcraft and Dorkcraft and overall in the gaming world unless you can find someone to play heads-up PUBG for $250K a game. Elky migrated to poker and it's been a financial boom for him ever since.

ElkY's won $4 million in WSOP events and another $10 million in other tournaments, which puts him at the top of the French all-time money list. Of course, those Hendon Mob stats do not include his online winnings and cash game pillaging. With $14 million in sanctioned tournament cashes, he's sitting pretty in the Top 50 all-time.

Elky put himself on the map when he final tabled his first EPT event in Copenhagen in 2007. He shipped his first EPT event by winning the 2008 PCA in the Bahamas for $2 million. Later that year, he shipped his first WPT event with a $1.4 million score at the Bellagio. It's been a whirlwind ride all over the world for Elky since he burst on the scene over 13 years ago. Wow… time flies… and ElkY has been a dominant force by evolving and morphing and continuing to crush souls.

In 2011, Elky won his first WSOP bracelet at the Rio in Las Vegas with a victory in $10K Seven Card Stud Championship for a $331K score. He outlasted a Stud-centric final table that included Chad Brown, Johnny World, Alexander Kostritsyn, and Steve Landfish.