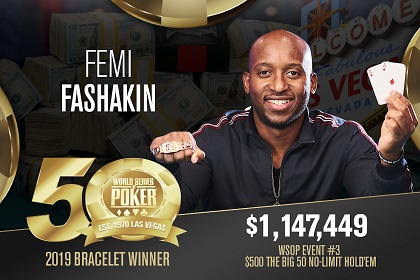 Ship it to Femi Fashakin! After over a week of nonstop poker at the Rio Casino, the first-ever Big 50 played down to its final table. Seven players returned to action on Friday to determine which one would become the next bling winner at the 2019 World Series of Poker. 2019 WSOP Event #3 THE BIG 50 was a special $500 NL tournament to commemorate the 50th anniversary of the WSOP.

The Big 50 needed a couple of extra days to determine a winner. It was that popular among the masses. I mean, for $500 you really can't get a better deal for the average poker fan or low roller or casual player or brokejokester. That's why over 28K showed up for a shot at a million bucks and a little bling.

On Friday, Adrian Curry hit the road first in seventh place, followed by Daniel Ghobrial in sixth place, and Walter Atwood in fifth. Nick Chow's remarkable run ended in fourth place, but he took home $405K for week's worth of work.

Israel's Rafi Elharar busted in third place, which set up the heads-up finale. Elharar earned a third-place payout worth $534K.

Allen Cunningham went on a super-deep run. Cunningham has a knack for navigating these massive-sized fields. Alas, his run ended in 47th place.