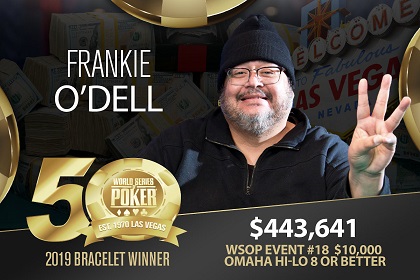 Ship it to Frankie three times. Somewhat quiet Sunday at the Rio Casino in Las Vegas. After a busy Saturday night with four bracelets awarded, only one piece of bling was up for grabs at the Rio. The 10K Omaha Hi/Lo Championship played down to its champion and Frankie O'Dell was the last player standing

The final table was no slouch either. O'Dell won the small mound of cash and the bling. The win marked his third bracelet of his career (original wins in 2003 and 2007) and ended a 12-year drought.

Only 183 players took a shot at 2019 WSOP Event #18 $10,000 Omaha 8 Championship. The top 28 places paid out with the majority of the booty set aside for the top three spots. First place would walk away with at least $444K and the jewelry and second place would bounce with at least a quarter-mil.

Frankie O'Dell made two final tables last summer, but he missed a shot at his third bracelet. Alas, he made sure he didn't squander this opportunity.

David Benyamine also made a token appearance at the final table. Benyamine showed everyone he has deft O8 skills as well.

Robert Mizrachi is no stranger to the winner's circle with four bracelets to his name. The brother of the Grinder who three pieces of bling in consecutive years between 2014-2016, but he whiffed the last two summers. Mizrachi went deep in this one but came up short.

Deeb hit the bricks first at the final table. Wafflecrush busted in ninth place, but he's back in the saddle once again. It won't be his last final table of the summer.

Ed Vartughian got picked off in eighth place, followed by Benyamine in seventh place, and New Yorker Jake Schwartz in sixth place.

Rob Campbell, the lone Aussie at the final table, finished in fifth place. Nick Guagenti followed him out in fourth place.

With three to go, the bracelet came down to Robert Mizrachi, Owais Ahmed, and Frankie O'Dell. All three had won bracelets before. Ahmed won a mixed hi/lo bracelet in 2011 with a victory in Omaha8/Stud 8. Mizrachi and O'Dell combined for six bracelets.

Alas, Mizrachi's run ended in third place. The elder Mizrachi banked $194,850 for third. His elimination set up the finale between Ahmed and O'Dell.

When the dust settled, O'Dell put away Ahmed to win the bling. Ahmed banked $274,192 for second place.

Frankie O'Dell earned a payout worth $443,641 for the win. He also slapped his third bracelet on his wrist. O'Dell now has over $1.1 million in career winnings.

O'Dell won all three of his bracelets in Omaha Hi/Lo. His first bling happened back in 2003 pre-Moneymaker days at the Horseshoe. His other victory happened in 2007 at the Rio.