And then there were nine. After seven official days of play and over a week and a half of nonstop poker, the 2019 World Series of Poker final table is set. To think that the second largest pool in the history of the Main Event took a shot at glory this year. Out of 8,569 hopefuls and dreamers, only nine of them remain. One will go on to win $10 million and become poker's next big star. Who will it be this year?

Everyone gets one day off so Saturday will be dark for Main Event action. No mas November Nine (thank the lord!) so the final table will play down to a champion by Tuesday night. The final table begins on Sunday and ends with 6 remaining. On Monday, they play down from 6 to 3. On Tuesday, it's three to a champion. Last year, John Cynn won a marathon heads-up bout that still gives me nightmares.

This year, Cynn got knocked out just before the money bubble. He didn't even cash in any events at the series this year.

It's impossible to defend a Main Event title in the modern era. Greg Raymer came close one year at the start of the poker boom when he went the distance in 2004 and went deep again in 2005, but fell short in 25th place the next year. That's still an amazing run.

The big name this year is Garry Gates, who has been in the poker industry since 2007. He started out as a member of the poker media before moving onto player relations with PokerStars. 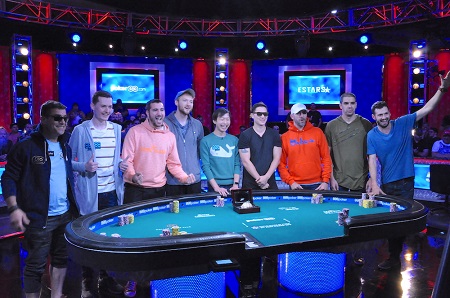 The seventh day of action began with 35 players remaining. Without any more hard stops (and a day off set for Saturday), the field went old school and played for an unlimited amount of time until the final nine were remaining.

At the start of Day 7, the UK's Nicholas Marchington started with nearly 40M. Tim Su, who bagged the lead on Day 6, began Day 7 with third overall in chips.

Early on Day 7, five players were knocked out in the first hour of action including a pair of Germans... Corey Burbick (35th), Steven Parrott (34th), Germany's Thomer Pidun (33rd), UK's Dan Charlton (32nd), and Germany's Chris Ahrens (31st). Steven Parrott came into Friday as the super-shorty with only 1.8 million. He tried to double up but failed to avoid elimination and he hit the bricks in 34th place.

Mario Navarro, the last player standing from Spain, saw his magical run end in 30th place. American Luke Graham busted shortly after in 29th when he lost a race with pocket Jacks against

against chip leader Nicholas Marchington. Marchington caught running hearts to flush out Graham and he chipped up to over 64 million with 28 to go.

Yuri Dzivielevski, the last Brazilian standing, busted in 28th place. With his elimination, there was a redraw for the final three tables. Marchington lost a bit but he continued to lead with 56 million and Tim Su was second with almost 40 million.

By dinner break, only 24 players remained after Zack Koerper busted in 26th and Japan's Hiroki Nawa busted in 25th.

The last Aussie remaining, Warwick Mirzikinian, bowed out in 20th place and Duey Dong exited in 19th place. Mihai Manole got outflopped by Garry Gates and got whacked in 18th place.

The final two tables were set, Hossein Ensan led with 120 million and Tim Suw as the only other player over 100M.

Garry Gates doubled up with Kings versus the big stack's Ace Queen. He moved up to 48M and fourth overall.

Robert Heidorn from Germany bubbled the final table in tenth place when his King-Queen lost a race against Livingston's pocket eights.

With the final table set, Germany's Hossein Ensan was the only player over 100M and he bagged 177M and the lead. American Garry Gates bagged second overall with 99.3 million. Zhen Cai is third with 60.6M.

Action resumes on Sunday where they will play down from nine to three. The finale will be on Tuesday night.