Once again, the 2019 WSOP awarded a bracelet to a previous winner. And once again, it's been a rather long time in between victories. This time, it took a decade before Greg 'FBT' Mueller returned to the winner's circle to bask int he glory of a bracelet win. Mueller won his first pieces of bling back in 2009 during the peak of the poker boom and the pinnacle of the FBT era. Mueller won the 2009 $10K Limit Hold'em title for a $460K score and he had to wait another ten years to slap a second bracelet around his wrist.

Mueller joined a growing list of players with at least two bracelets.

It was a buy Friday night at the Rio with the conclusion of Event #31 $3,000 NL 6-Max playing down to its champion. France finally notched their first bracelet victory of the 2019 WSOP when Thomas Cazayous went the distance. 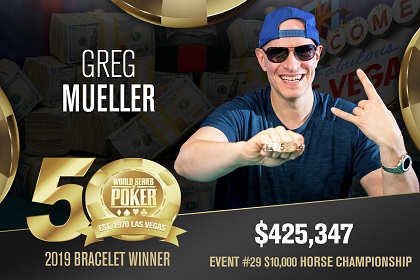 HORSE is one of those games that tests all-around poker acumen. You can get lucky and suckout a lot in hold'em, but you really need to have your nads together to survive a round of Razz.

This year's 10K HORSE event attracted 172 runners. Only the top 26 places paid out of the $1.6 million prize pool.

Mueller found himself at his 14th final table. If he wanted to win a second piece of bling, he'd have to work his arse off to make it happen.

Scott Clements won a bracelet last week and had made yet another final table, but his run ended in fourth place, which paid out $132K.

Italy's Dario Sammartino missed an opportunity to win Italy's first bracelet of the year. Alas, he bowed out in third place, which paid out $185K. Not too shabby, eh? Dario's bustout set up the heavyweight bout between FBT Mueller and Colombia's Daniel Ospina.

Mueller has always been a savvy limit hold'em player, but Ospina is considered one of the better mixed-game players from Latin America.

When the dust settled, the Canadian took down the Colombian. Ospina's run ended in second place. He earned a runner-up score worth $262,882.

Mueller cashed for $425,357. He also locked up his second bracelet win. His WSOP winnings is closing in on $2.85 million.

The $3K Short-handed NL event is a popular event on the schedule. This year's event attracted 754 runners. Only the top 114 places paid out of the $2 million prize pool

Nick Howard could not overcome Thomas Cazayous. Howard busted in second place and earned a runner-up payday worth $256K. Not too shabby, eh?

Thomas Cazayous, a Frenchman living aboard in the UK, won $414,766 and his first bracelet.