Another wild Saturday night in Las Vegas. The second weekend of the 2019 World Series of Poker included four new champions. Two final tables were postponed from the previous night with two others playing down to champions. Along the way, Brazil earned their first bling amidst a frenzied crowd and three Americans won bracelets including blast from the (virtual) past.

Isaac "WestmenloAA" Baron finally stepped into the winner's circle for the first time in his career after chasing a bracelet for the last decade. And Ben Yu missed a chance at winning his fourth bracelet when he got picked off by Sean Swingruber in the $10K Heads-Up Championship. 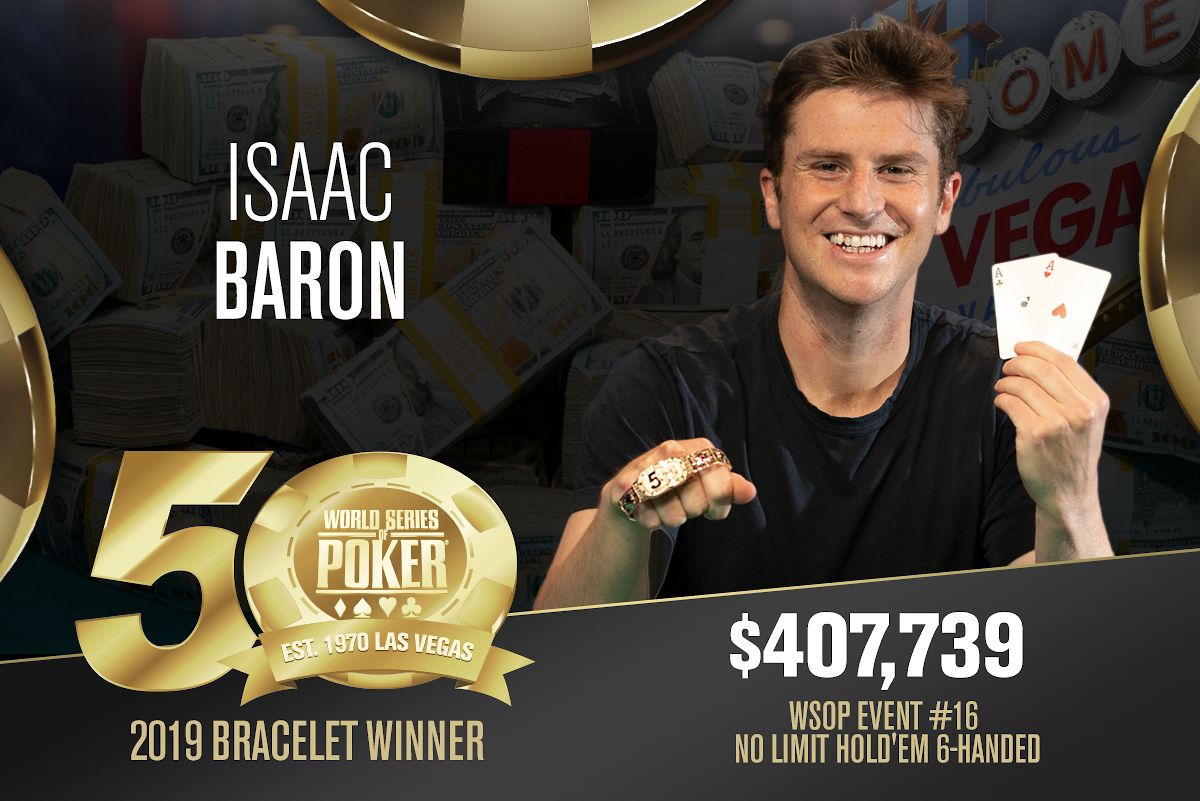 Isaac Baron might seem somewhat familiar to you, because he is. If you played poker during the height of the glorious online poker boom, then you are probably aware of "WestmenloAA". He crushed the virtual tables before Black Friday but was no slouch at the live action either. Baron went deep at the 2013 PCA (third place) and at the 2008 EPT Monte Carlo (fourth place). He missed winning a WPT title in 2015 when he lost heads-up to Taylor Paur at the WPT Bay 101 Shooting Stars.

Baron, 31, had a great career and made a couple of final tables at the WSOP, but had never gone the distance at the World Series of Poker... until now. His best finish was a fourth-place score in 2014 in the $10K PLO Championship.

Baron, who is originally from Menlo Park, California, currently resides in Los Angeles these days. Baron took a shot at Event #16 $1,500 NL (6-Max). The short-handed tables served him well. Baron faded a field of 1,832 runners to win $407,739. Baron now has over $6 million in career earnings.

The cash is always welcomed, but he really wanted the bling. Baron found his name on the dubious list of best online grinder who never won a bling. Well, you can cross that name off the list now.

Marshall hit the road first at the final table. For a sixth-place finish he walked away with $66K.

Richard Hasnip, the token Brit at the final table, busted in fifth place which paid out nearly $91K. James Hughes hit the bricks in fourth place. He managed a six-figure score worth $126K.

Steve Garner busted in third place, which set up the heads-up finale between Baron and Singapore's Ong Dingxiang. Baron knocked out Dingxiang in second place. For a runner-up share, Dingxiang banked $251,937. Not too shabby, eh?

Baron won $407,739 for being the last person standing in Event #16. He also finally slapped that elusive bling on his wrist for the first time. Well deserved, WestmenloAA.

Vamoooooos! Ship it to Brazil. It's always really dull at the WSOP until a Brazilian makes the final table. Seems like someone throws up the Brazilian bat signal and every Brazilian on the West Coast flocks to the Rio to sweat the final table. Hey, Brazilians love a good party and do not need a reason to celebrate. In this instance, they were there to cheer on Murilo Souza.

Brazilian online pro Murilo Figueredo went the distance in Event #14 $1,500 HORSE. Figueredo faded a field of 751 runners, who created a prize pool slightly over $1 million. Only the top 112 places paid out with most of the cheesecake set aside to the champion.

Figueredo defeated Stockfish heads up for the HORSE bling.

The 10K Head-Up Championship is always one of the more popular events at the World Series of Poker. This year's affair saw Ben Yu, wearing a swanky suit and tie, attempt to win his fourth WSOP bracelet. Yu already won three bracelets, but missed out once again with a second-place finish.

Event #15 $10,000 NL Heads-Up Championship attracted 112 players. They created a prize pool that was a tad over a cool million. Only the top 8 places paid out.

Matthias Eibinger finished in eight place and cashed for $31,151 for being in the Elite 8. Kristen Bicknell went deep, but she also busted in the quarterfinals. Jack Schindler's run ended in sixth place, while Jimmy D'Ambrosio finished in fifth place.

Ben Yu defeated Keith Lehr in the semifinals to advance to the finale for a shot at his fourth bling. In the other semifinal, Sean Swingruber knocked out Cord Garcia in third place. Lehr and Garcia earned $73,333 each for making it to the semifinals.

The heads-up bracelet came down to Sean Swingruber vs. Ben Yu. When the dust settled, Yu could not overcome the LA grinder. Yu banked $115,174 for second place. Not too shabby, eh?

Cash-game specialist Sean Swingruber might start playing more tournaments after his $186,356 score in this one.

The NL Shootout is always a fun event. If you love playing SNGs, then the Shootout is the event for you. If you get hot and win a couple in a row, you can add a piece of bling to your jewelry collection. Actress Jen Tilly tried to add a second bracelet to her vast array of sparkly things, but she busted/cashed in 96th place.

American pro Brett Apter was the last one standing in the Shootout. For surviving the bloodshed, he banked $238,824... plus his first bracelet.