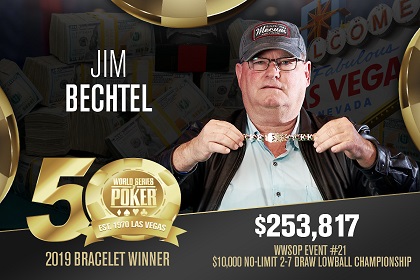 Man, 26 years is a long time. Jim Bechtel waited 26 years before he could step into the winner's circle once again. When Bechtel won, Kurt Cobain was still alive and no one had an email address. Heck, Fedor Holz wasn't even alive yet and most of the today's top players were still toddlers.

Bechtel had a couple of other final table appearance along the way, including a deep run in the first-ever 50K HORSE event (won by Chip Reese in 2006) in which he took fourth place. But that's as close as he'd get to winning another. That is... until the 50th WSOP. A legit blast from the past and grizzled gunslinger from yesteryear waltzed into the modern-day bougie WSOP and bested the best of the best.

Bobby Bellande went deep in search of bling and oodles of cash, but his run ended in fifth place.

Prahlad Friedman made a token appearance at another WSOP final table, but he couldn't get his groove going once it got down to the final six. He bounced in fourth place which paid $78K.

WPT King Darren Elias found himself among the final three. Hey if it were NL, I'd love his chances at that juncture. However, Elias looked like a mere mortal in Lowball despite his third-place finish. He walked away with six-figures though and almost $110K. Elias' elimination set up the heavyweight bought for the 10K Lowball title between Jim Bechtel and Vince Musso.

Musso blew the heads-up chip lead and Bechtel stormed back to win the bling. Musso banked $157K for a runner-up finish. Not too shabby, eh?

Bechtel earned a payout worth $253,817. He passed $2 million in career WSOP earnings with this score. He also won his second-career bracelet.

Chip Reese previously set the largest layoff between bracelets with 24 years between his victory in 2004 and his last piece of bling in 1980. Now, that honor goes to Jim Bechtel for a 26-year layoff.