The 2019 World Series of Poker continued with a couple long-ass events that finally played down to a champion. Those included Event #34 $1K NL Doublestack and Event #37 NL Deepstack. Along the way, one of the best players to never win a bracelet finally got the proverbial monkey off his back. Joe Cheong, won three Circuit rings, but finally stepped inside the WSOP winner's circle for the first time in his career. And it was a long time coming for 'subiime'. 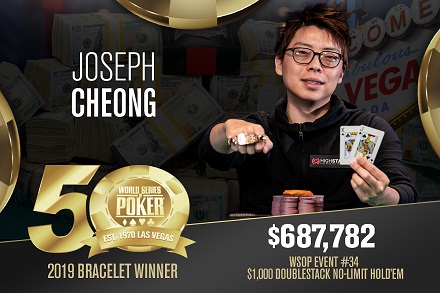 Heading into the final day of action, six players remained and everyone wondered if this would be the day that Joe Cheong finally ships a bracelet? He first made a name for himself online as "subiime" and later made the November Nine. But he never won any bling.

Cheong came into the final day with a significant chiplead over the other final five players as the only player with 100M in chips.

Only the top 932 places paid out with most of the cheesecake set aside to the champion and the Top 3.

Italy's Andrea Buonocore bounced in fourth place. At that point, it seemed like the bracelet was Cheong's to lose.

At that point, the remaining pack caught up to Cheong. Ivers snagged the lead... momentarily. Cheong got it right back.

China's Zinan Xu busted in third place, which paid out a whopping $314,875. Not too shabby, eh? With Xu's bustout, it set up the heads-up fight between Cheong and Ivers.

Ivers trailed nearly 3-1 in chips when heads-up began. It only took 36 hands for Cheong to put away Ivers.

Cheong banked $687,782 and he got to finally slap a bracelet around his wrist.

David Dibernardi bubbled off the final table in tenth place.

Only the top 420 places paid out with the majority of the cheesecake set aside for the champ.

Robert Mitchell cashed a half-dozen times at the WSOP, but he always fell short of a final table... until now.