Busy hump day at the Rio in Las Vegas with multiple events playing down to a champion including the highly-popular running of the donks known as the Milly Maker. The winner gets at least a cool million as terms of this clever marketing scheme cooked up by suits in a boardroom somewhere. This year's Milly Maker banked $1.3M for almost a week of work, which isn't that bad all things considered.

Along the way a few other bracelets were awarded in 8-Game, DOUBLESTACK NL, and DEEPSTACK PLO.

DOUBLESTACK played down from 3,253 to a champion and LA's Jorden Fox snatched up his first bracelet.

Andrew Donabedian won his first bracelet when he shipped the DEEPSTACK PLO for $205K. He outlasted a final table that included the one and only Capt. Tom Franklin.

Back in 2009, Rami Boukai won a HA bracelet (PLH and PLO). He waited a full decade to win a second bracelet with a sweet score in Event #23 8-Game. Boukai also denied Chainsaw Kessler his first bracelet. 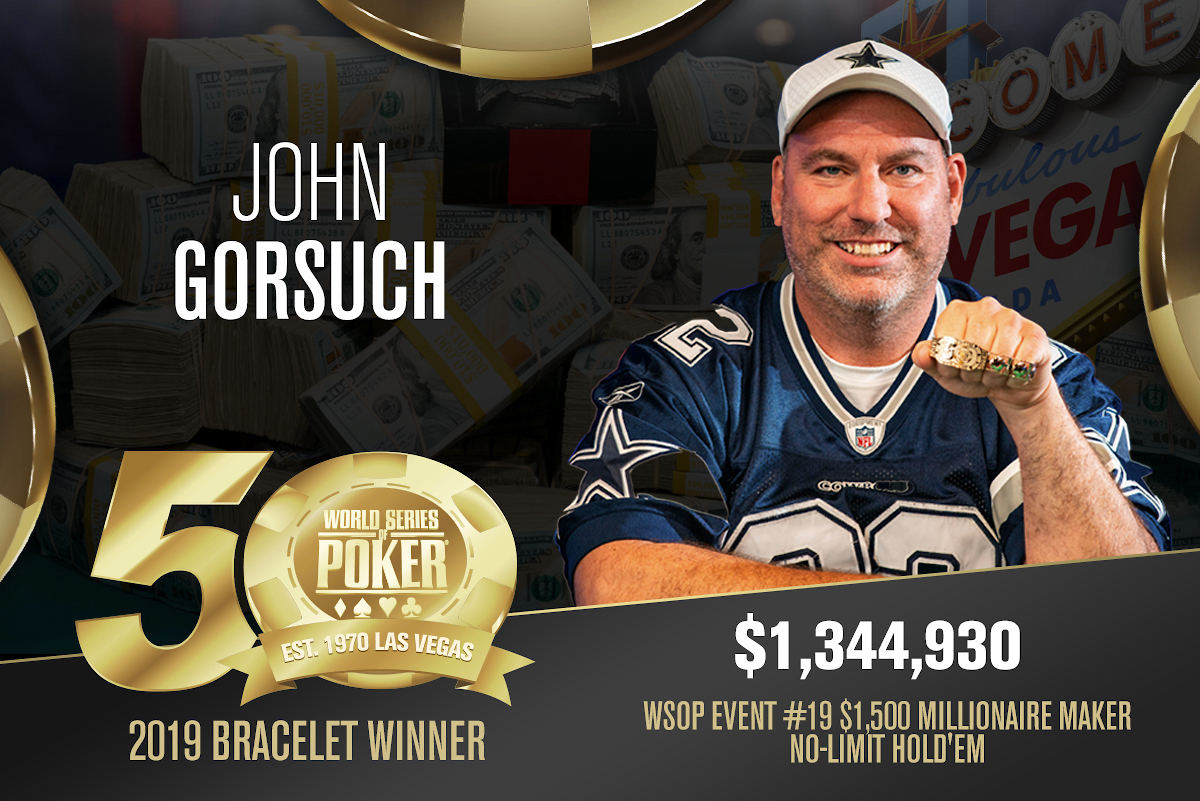 Another day, another record-setting field at the 2019 World Series of Poker at the Rio during its 50th anniversary.

The largest-ever Milly Maker attracted 8,809 runners, which set a new record. The prize pool this year nearly topped $11.9 million. The top 1,322 places paid out, which is redonkulous. Most of the cheesecake went to the champion and the top three places with third place walking away with $619K and the runner-up winning $830K.

Corey Albertson's epic run ended in sixth place, which paid out a nifty $267K. Not to shabby, eh?

Vincas Tamasauskas from Lithuania busted in fourth place. He took home $464K for a week of work. Lokesh Garg busted in third place, which set up a heads-up battle between Japan's Kazuki Ikeuchi and John Gorsuch from Florida.

When the dust settled, John Gorsuch walked away with the title, the bracelet, and $1.3M in cash.

Ship it to Rami 2x! He won his second bracelet and denied Allen Kessler a shot at his first bling.

Over in the 8-Game mix event, which attracted mixed-game specialists far and wide, they got 612 runners and a prize pool worth $826,200. The top 92 places paid out with $177K set aside to the champion.

Rami Boukai from San Diego outlasted everyone in the 8-Game Mix field to win his second bracelet. He won his first piece of bling a decade ago with a victory in a PLH/PLO event during the peak of the glorious poker boom.

Capt. Tom Franklin cashed in his third event at the 2019 WSOP. He made another final table but could not win his second bracelet. Capt. Tom busted in seventh place.

Andrew Donabedian picked off Todd Dreyer heads-up for the victory and $205,605 in cash. Oh, and plus the bling.