Ship it to Germany. Jonas Lauck and the Germans stepped into the winner circle once again. This time it happened in the Super Turbo Bounty.

Other bracelet winners include Brazil's Yuri Dzivielevski for a win in the Mixed and Jason 'TheBigGift' Gooch binked Sunday's Doublestack. 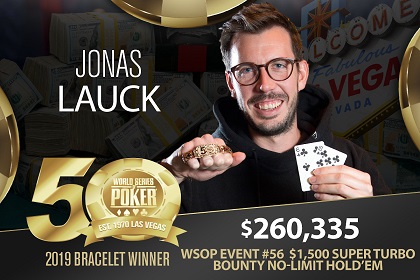 The Super Turbo Bounty event attracted a slew of turbo-charged runners. A total of 1,867 players boosted the prize pool to over $2.5 million.

Only the top 280 places paid out, but at least a quarter-mil was set aside for the champ.

None of the Aarons went too far. All three busted rather early at the final table.

Robert Bickley found himself heads up against Jonas Lauck for the bling. UK vs. Germany for the title. The Germans came out on top.

Bickley busted in second place, which paid out $161K. Not too shabby, eh?

Lauck got to fondle a stack worth $260K. He also slapped a piece of bling around his wrist for the first time.

This Mixed 8 event attracted 401 runners and a prize pool worth $902K. Only the top 61 places paid out with $213K set aside to the eventual mixed champ.

Brazil's Yuri Dzivielevski went the distance and as expected, it was a rowdy rail.

Jason 'TheBigGift' Gooch went the distance in the weekly Sunday online bracelet event that attracted 1,333 runners and a prize pool worth $1.2 million.