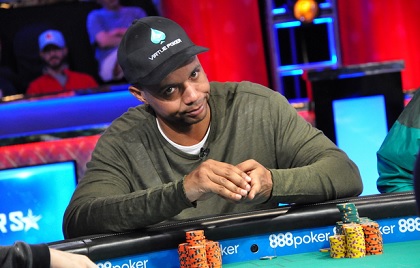 Phil Ivey went deep. Pretty deep in the 50K PPC. They money would be good, who wouldn't want a cool million? But Ivey wanted the special trophy that features the name of one of his best friends -- Chip Reese. The 50K PPC is a bracelet event, but you also get your name enshrined on the Chip Resse Trophy. It's sorta like the Stanley Cup but for Poker Players.

After winning it three times, the Grinder will not win this one. He didn't even cash this year. Only the top 12 places out of the 74-player field got a slice of the cheesecake.

Day 4 began with everyone in hot pursuit of Ivey. He'd reliquish the lead while Josh Arieh took over the lead.

With eight remaining, Ivey couldn't stave off elimination. He missed the final table by two spots and will have to wait another day to win his 11th bracelet.

For now, he's still tied with Johnny Chan and Doyle Brunson with ten pieces of bling each. Both Chan and Brunson won their tenth back in 2005 and neither has shipped one since. Brunson is officially in retirement, but Chan might have a final table or two left in the tank.

And Ivey? He won bracelets in back-to-back years in 2013 and 2014. But he's been cold over the last five summers. Well, if Ivey played half as many events as Hellmuth, he would have caught the Poker Brat by now.

Anyway, there's six players remaining in the 50K PPC. They're fighting to be the last player standing to win the $1.1 million in cash.

Josh Arieh bagged up the big stack with 6.3M, followed by Bruce Yockey and Phi Hui. They're the only other two with at least 4.1M in chips.

John Esposito is not far behind with 3.6M. Shaun Deeb is one of the short stacks with 2.5M, but he's really only a double up away from second in chips. Jungleman is the shorty with 1.2M.

Action resumes on Friday and they will play down to a champ. The bigger question is if Arieh can go wire-to-wire, or if Deeb will make a run and show off his finishing skills.

And what about Jungleman? If anyone is poised for a sick comeback, it's the JUNGLEMAN!